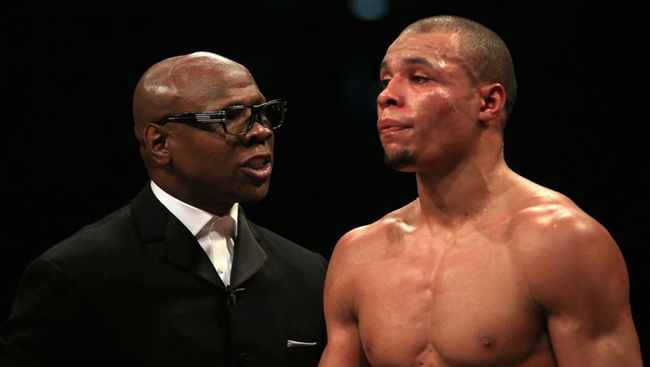 Nick Blackwell has criticised the Eubanks for ignoring his family’s requests not to speak to the media while the boxer was in a coma.

25-year-old Blackwell suffered a swelling on the brain during his British middleweight title fight against Chris Eubank Jr on 26 March. He remained in an induced coma for a week and is now making a full recovery, but has retired from boxing.

His initial reaction was to hold no hard feelings against the Eubanks. Notably, Chris Sr was heard during the fight telling his son not to aim punches at Blackwell’s head as he feared for the fighter’s safety.

But Blackwell has now spoken out against the pair in an interview with The Sun, saying they ignored his family’s requests not to speak to the media.

“I haven’t any hard feelings about the fight because you’re in there to win and try and hurt someone – it’s just the stuff he has done after,” said the 25-year-old. “It’s inhuman, it’s disgusting.”

“They were trying to make themselves look like the good guys when they are the opposite. My family and friends were begging them not to talk, but they ignored it.

“I’ve only just been shown the press conference and I know exactly what happened. It isn’t human what they’ve done. They were grabbing as much attention as they could.

“I was still in a coma but they went ahead and did it.

“That’s the Eubanks, isn’t it? They just want attention, no matter if it’s a bad or a good thing.”

According to The Sun, Blackwell added: “If I could have one more knockout shot, I’d love to land it on the jaw of Chris Eubank.” However, he has since said that he does not remember making the remark.