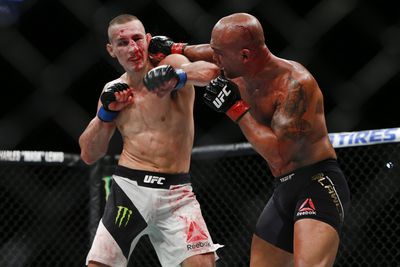 “Events” can be tricky, because they’re a confluence of two clashing directions: Prospect and retrospect. One very seldom has much to do with the other in MMA. Some cards that look great on paper play out as ultimate duds. Some cards that look like dog mush up front end up reminding us why we watch the fight game to begin with.

We can control our excitement going in (or at least most of us can), but even if we try to sugarcoat things afterwards we can’t reshape what happened. It either lived up to something, or it didn’t. The bar is set, and we end up either above it or below it.

Perhaps no card in the history of the sport so evenly went from impossible buzz/hype to a feeling of total gratification than UFC 189 in July 2015.

In prospect it was the longtime champion Jose Aldo against Conor McGregor, not just the biggest featherweight fight of all time but the biggest fight of the year. During the unprecedented world tour the two embarked on, the thing went from surreal to colossal. Sitting next to the players on most stops were Robbie Lawler and Rory MacDonald, a brooding, almost forgotten subset that lurked in the very lengthy shadow of the Irishman. Rarely do you get set-ups as pure as this.

McGregor, a sharp-dressing coxcomb with momentum and supernatural self-belief, against Aldo, who hadn’t lost in a decade. This was a fight destined to set fact apart from fiction. Then Aldo fell out with a rib injury just a couple of weeks before the fight, and it took on a fresh coat of intrigue.