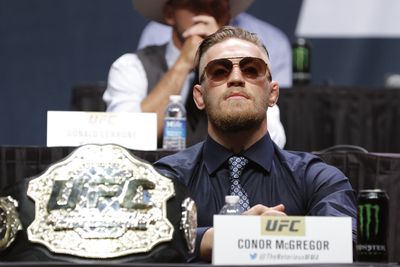 There’s only one Conor McGregor.

And there’s only one fighter who delivered like McGregor in 2015.

It’s almost comical now to look back on where the newly crowned UFC featherweight champion stood when this year began.

Remember that? McGregor was called the UFC’s protected one. The golden boy. The guy who had just one win over a Top-10 divisional opponent (Dustin Poirier), yet the one whose mugs was plastered all over FOX on NFC conference championship Sunday leading into his Jan. 18 clash with Dennis Siver in Boston.

McGregor lived up to all the pressure that went into that much-hyped fight, as he hunted Siver down and finished him the second round, then jumped out of the cage and got in longtime featherweight champion Jose Aldo Jr.’s face.

That confrontation was supposed to lead to a title clash at UFC 189 in July. Still, the critics carped, McGregor had yet to face a top-flight wrestler, like Frankie Edgar or Chad Mendes. Then Aldo went down with a rib injury and Mendes was inserted into the bout on two weeks notice. McGregor, who had himself battled through a leg injury in training, was indeed put in some bad places by Mendes. But McGregor rallied, unloaded his lethal left hand, and finished Mendes with two seconds left in the second round.

So much for McGregor not being able to handle wrestlers.

Still, though, the cynics caterwauled: Just wait til Aldo got his hands on McGregor. Despite a mounting body of evidence to McGregor’s legitimacy, which by this point included 14 straight wins, with six of his seven UFC victories coming by way of finish, McGregor was supposed to meet his Waterloo in Las Vegas on Dec. 12. Aldo entered UFC 194 the only featherweight champ the UFC had ever known, the last ….View full article