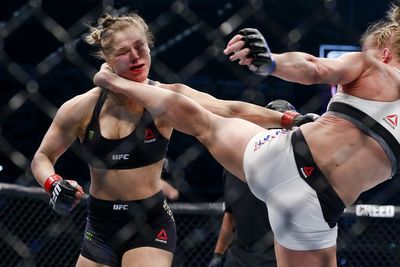 It is a testament to the wickedness of the blood gods that after a rise dotted with precision and prediction, Ronda Rousey ultimately foretold her own demise, spelling it out with painful accuracy to the very audience she invited into the MMA bubble.

It sounded so innocuous back then. Still awash in the afterglow of her triumph in Brazil, Rousey laid out how her latest challenger was different than all the rest. She lauded the boxing accolades. She lauded the athleticism. She called Holly Holm the biggest threat to the title she ever faced. Then she did her best to sell the event’s $59.95 price tag, explaining to the mainstream eyes tuned to Jimmy Fallon why such a price would be worth paying, even if the entire fight could inevitably wind up on Instagram like all the rest.

“She’s the type of fighter you have to be very, very patient with,” Rousey said. “I feel like she’s going to try and, like, keep distance. Keep far away from me, and get me frustrated to a point where I’ll make a mistake, and she can try and kick me in the head.”

Rousey then raised a finger. Here was the punchline, the drop of sass expected from the baddest woman in the world. “But it’s not going to go like that.” Cue, audience laughter. And just like that, the moment passed. Another drop in a bucket that would eventually overflow with retroactive glee.

One month later, with the Australian skies blotted out by flies, the world learned exactly who Holly Holm was and how apt Rousey’s hunch had been.

Holm never charged. She never panicked. She simply circled. The distance control Rousey feared proved to be impeccable, and Holm gradually melted the UFC queen into a woman we had never seen ….View full article