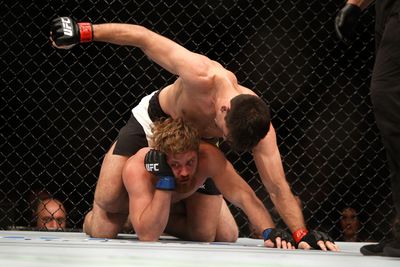 It started with a simple photograph captured by Getty Images photographer Steve Marcus during UFC 194.

The photo depicts the 30-25 beatdown of Demian Maia over Iceland’s Gunnar Nelson, capturing a moment in which the unflappable Conor McGregor teammate looks positively bored in a rather compromising position.

But while the fight itself may not have been competitive, there’s been plenty of competition over at Reddit’s Photoshop Battles page, where Nelson is the star attraction of a series of pro and amateur attempts to make this fight more interesting:

It’s hard studying with this guy on my back.

Where’s my red stapler? I was promised a stapler.

Damn, it’s just… out of reach

This one would work better with Conor McGregor.

Ok, time to shut this down.

Well, there you have it. So far.

Any photoshop fans willing to give it a go?