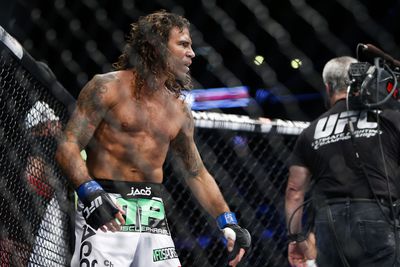 Clay Guida is ostensibly a UFC featherweight. If you want proof, just pull up the UFC rankings. There he is, listed below the Irish green and Brazilian gold, standing guard over the top-10 with his manic pressure and occasional belch. Guida is three years into this 145-pound experiment, yet for a guy who’s been around longer than the division itself, he remains strangely hard to pin down.

Part of it is his own making. In the minutes after Guida earned a smothering win over Robbie Peralta in April, he seized the mic and challenged Rafael dos Anjos, lightweight’s current standard-bearer. It led to a curious sight. A fringe contender throwing down the gauntlet for the champion a weight class above. When is the last time you saw that?

But the peculiar thing about Guida is that the callout made more sense than if the names Aldo or McGregor had escaped his mouth. Guida spent seven years at 155 pounds with the UFC, nearly always fighting the best the division had to offer, and often winning. Within a span of 10 memorable months in mid-2010, he broke the jaw of dos Anjos, choked out Pride’s former lightweight king Takanori ….View original article