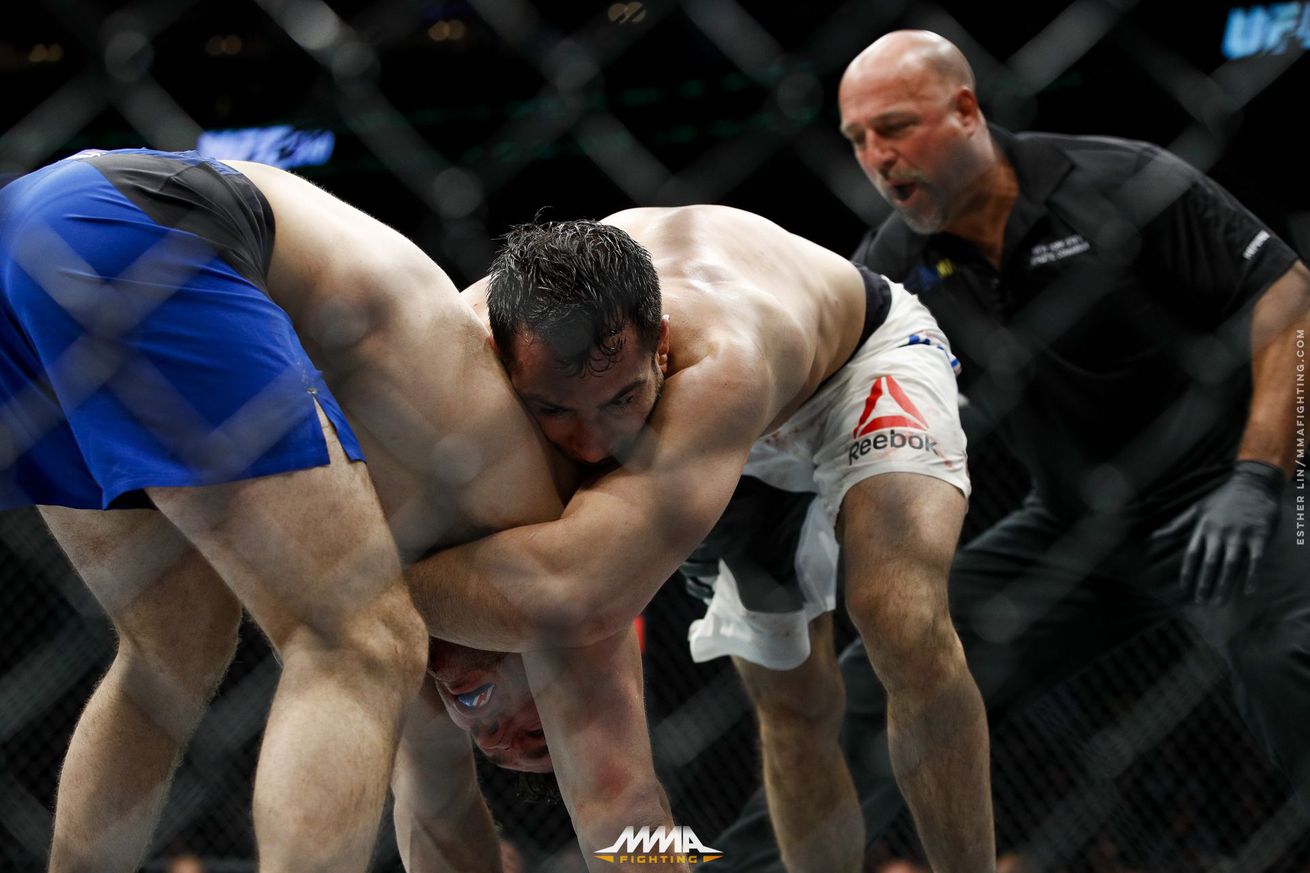 Gegard Mousasi and Chris Weidman were involved in one of the most controversial finishes of 2017.

At UFC 210 in April, Mousasi landed what appeared to be illegal knees to Weidman’s head. It seemed like Weidman had both of his hands on the ground when the blows connected. Referee Dan Miragliotta thought so, halting the action due to what he believed was a foul.

There was a lot of confusion in the following seconds and minutes. But Miragliotta was able to poll referee John McCarthy, who was outside the Octagon, on what he had seen. McCarthy said Weidman did not have both palms or fists down — which the Unified Rules of MMA say makes for a grounded opponent — and therefore the knees were legal.

Miragliotta reversed his call and, because doctors determined Weidman could not continue due to the strikes, awarded Mousasi a TKO victory.

In the aftermath of that result, Weidman appealed to the New York State Athletic Commission (NYSAC) and many wondered what the heck happened. The UFC broadcasters reported that instantly replay was not allowed in New York, so Miragliotta should not have been able to consult McCarthy, though McCarthy later said he was just going by what he saw in real time.

The UFC 210 co-main event finish ended up being an indictment on the fact that many states have not approved the changes to the Unified Rules of MMA, which include the updated grounded fighter definition. But it also called into question what the sport should do about replays — should they be allowed and how should they be handled?

The Association of Boxing Commissions and Combative Sports (ABC) approved a clear-cut recommendation for replay use last week at its annual meeting in Connecticut. The proposal was brought to the ABC body by the MMA rules and regulations committee.

It’s important to note that the newly approved guidelines are just that: guidelines. They will not be codified regulations in the Unified Rules of MMA, because many shows are not televised and don’t have the technological ability to implement official instant replay. Like in the case of the Unified Rules, no state athletic commission is bound by ABC policies.

The new guidelines regarding instant replay state that it can only be used in “fight-ending sequences,” like the one with Mousasi and Weidman at UFC 210. A referee, at his or her discretion, can check a replay to determine whether or not a foul or legal blow ended the fight. The referee can use that information to decide the result — the winner, whether the fight is a TKO, submission, no contest or disqualification.

Instant replay will not be used to review the actions of the referee, the guideline states. Also, if instant replay is used that means the fight is over. No matter what is culled from the replay, the fight cannot be restarted.

“The sole purpose of Instant Replay in MMA is to allow the referee to make a correct call on the outcome of the fight in calling,” the proposal from the rules and regulations committee to the ABC states.

Also approved by the ABC was a guideline regarding the loss of bodily function during a fight. The policy states that if a fighter, during a round, “visibly loses control of bodily function (vomit, urine, bowels),” the fight will be stopped and that athlete will lose by TKO.

If this policy was in effect during a recent fight between Felice Herrig and Justine Kish at UFC Fight Night 112 in June, Herrig would have won by TKO (medical stoppage) when Kish visibly lost control of her bowels while in a rear-naked choke.

If the loss of bodily function occurs in between rounds, the ringside doctor will be called in to evaluate the athlete and determine whether or not he or she can continue. If the fighter cannot continue, the opponent is awarded a TKO victory.

In addition to instantly replay and the loss of bodily function policy, the ABC approved a uniform set of policies for hand wraps, which can be read below from the committee proposal sheet:

A maximum of one roll (No more than 2 inches wide X 15 yards in length) of white soft cloth gauze (any brand) is permitted per hand. The gauze may not exceed the wrist of the competitor’s gloves. The exposed thumb is an option to be protected.

A maximum of one roll (No more than 1 ¼ inch wide X 10 feet in length) of white athletic-type tape (any brand) is permitted per hand. The tape may not exceed the wrist of the competitor’s gloves. Tape may be placed through the fingers but may not cover the knuckles. The exposed thumb is an option to be protected. A single layer of elastic or flex-type tape is allowed to be applied over the completed wrap.

Other than the competitor’s hands (as previously listed), there will be no taping, covering or protective gear of any kind on the upper body. This includes but is not limited to: joint sleeves, padding, any form of brace or body tape.

A competitor may use soft neoprene type sleeves to cover only the knee and/or ankle joints. Approved sleeves may not have: padding, Velcro, plastic, metal, ties or any other material considered to be unsafe or that may create an unfair advantage. Tape, gauze or any materials other than the approved sleeves are not permitted on the lower body.

*Medical and/or Commission Staff have the ability to allow exemptions for specific situations.