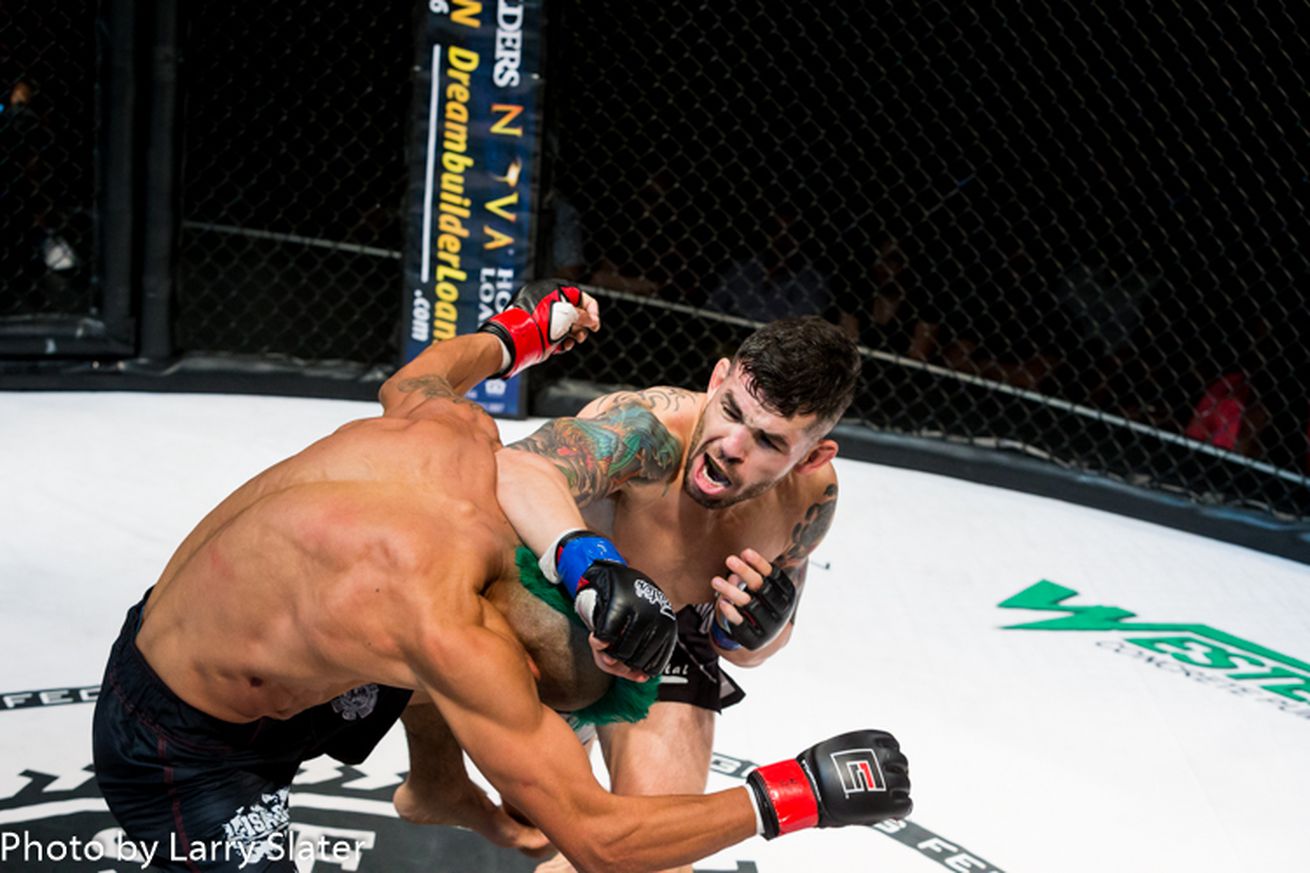 Roman Salazar had an interesting 10-month odyssey into the UFC. Just days after defending his World Fighting Federation bantamweight title he got a call that Mitch Gagnon needed an opponent in Nova Scotia. The fight was in less than a week, and he was only eight days removed from having fought Jose Carbajal in Chandler, Ariz.

It was one of those badly timed opportunities you just can’t refuse.

“You know, there I was getting the call from that Las Vegas area code,” Salazar remembers. “My wife and I had just got married, and I was like, do I owe money to somebody in Las Vegas or something? Why are we getting a call? Then my manager called and said [matchmaker] Sean Shelby is trying to call you, and I’m like ‘dude, you’re kidding me?’ I had literally just fought and defended my belt a week before and I remember being — of course, like any Mexican — at a quinceañera and had a Bud Light in my hand.”

Salazar, who had won four straight fights when the call came in, was staring at that beer as he made his decision. He was immediately wondering how he would expedite his passport, how he would get down to weight, how he would prep for Gagnon…

“My big win there was just being able to make weight. When [Shelby] called me I was at 158 pounds and I got down to 135 in that amount of time. Come fight time I felt like I’d already won something just making weight.”

Salazar, who returns to action tonight with Combate Americas in Tucson against Ricky Palacios, understandably lost his UFC debut. Gagnon sunk a rear-naked choke just over two minutes into the action. He returned four months later against Norifumi Yamamoto at UFC 184, and this time received an eye poke midway through the second round, rendering him unable to continue. That fight ended in a “no-contest.”

By the time he fought Marlon Vera at UFC Fight Night 73 in Nashville, he felt a little snake bit. He lost that fight via a triangle armbar, and just like that he was back on the local shows.

“Every time I talk to anybody about my time in the UFC they say, ‘you’ve had the weirdest run in UFC history,” he says. “But the beautiful thing about that is, I’m still on good terms with Sean Shelby. We still talk. My management team, I just talked to them, they said hey man get on a little run here, we’d love to have you. It’s just about getting those wins. I know what my potential is, it’s just about going out there and doing it.”

Salazar will take on Palacios in the main event at Combate Americas 13, which airs live on Azteca America as well as ESPN Latin America on Thursday night. It will be a homecoming for Salazar, who is from Scottsdale, Ariz., and has fought in Tucson many times. And it’ll be the first big step for a man who took a shot at making his name, and had circumstances collude against him.

Not that he’s making excuses.

“I feel like in the UFC, no one really knew who I was or what I was about,” he says. “If the world has a chance to see what I’m about and what I do at the gym, they’re going to realize man, what I’m capable of is top 10 potential. We bring guys in that are top 10 in the UFC, and I’m having my way with them.

“I don’t know if it was a little bit of too much too soon. Maybe I wasn’t quite there, and every time I fought I was fighting not to lose in the UFC instead of pushing to win, like I had originally fought all my fights before.”

Salazar, who goes by the nickname “El Gallito” — “It means ‘little cock,’” he says, “I didn’t think that one through” — is coming off a victory over Gilberto Aguilar at WFF 32 in November. For him, it’s been nearly two-and-a-half years since he last tasted victory, and he’s savoring the feeling.

He took some time off after his UFC stint — as well as a subsequent loss to Ed West during his time of reeling — to get his focus right.

“Obviously after that last UFC fight against Marlon ‘Chico’ Vera I took some time off trying to reassess and put everything in order here,” he says. “I’m just start putting my career back together and fighting like me again. I had to soul search a little bit and remember the reasons why I actually fight. It’s because I love this sport. I want to be the greatest me I can possibly be.”

Salazar, being a Mexican fighter, says he feels “blessed” that he landed with Combate Americas for what he hopes is his rise back up the ranks.

“I love it, it’s such a great platform for Hispanic heritage fighters,” he says. “They’ve been great to me, and are taking care of me really well. I couldn’t be more happy with them. And like I said, I was a fan anyway. As soon as the Combate cards came out I was always watching them on my Fight Pass subscription.

“It was cool, man. When they offered me the Palacios fight, I knew exactly who he was, because I’d watched him fight. I love the match-up. I love the fireworks that this fight could make happen. Our styles match-up really nice.”

The 29-year-old Texas native Palacios has won four straight fights, with the last three happening under the Combate Americas banner. In his last back in May 2016, he scored a unanimous decision victory over Brandon Royval. His Combate debut against Benji Gomez was memorable, as he scored a head kick victory just 60 seconds in.

Salazar knows that Palacios likes to bring heat, which is why he jumped at the chance to fight him.

“He’s the type of fighter that will literally live and die by the sword,” Salazar said. “He’s willing to take three punches to get one — he’s that kind of fighter. He’s in your face, and it’s fun to see. It’s just about putting him in uncomfortable situations and not appeasing his style. I can strike with him, but that doesn’t mean I need to be in boxing range with him the entire time. I’ve got to keep him guessing and not let him set his feet up for those bombs he throws.”

Salazar looks at his fight as the first one in the new chapter of his career, wherever that leads.

“I’m still rather young in this sport, so it’s still about getting better and getting the experience I need,” he says. “The next time I do get called up, if I ever get called up by the UFC or one of the other big promotions, I want to make sure I’m ready.”

And just to clear up that nickname, for those who don’t know.

“It’s more like little rooster, is what gallito is,” he says. “It was actually nickname given to me by an uncle when I was seven years old. It kind of chose me, and that’s what people know me as. Everybody’s been calling me gallito for years.’