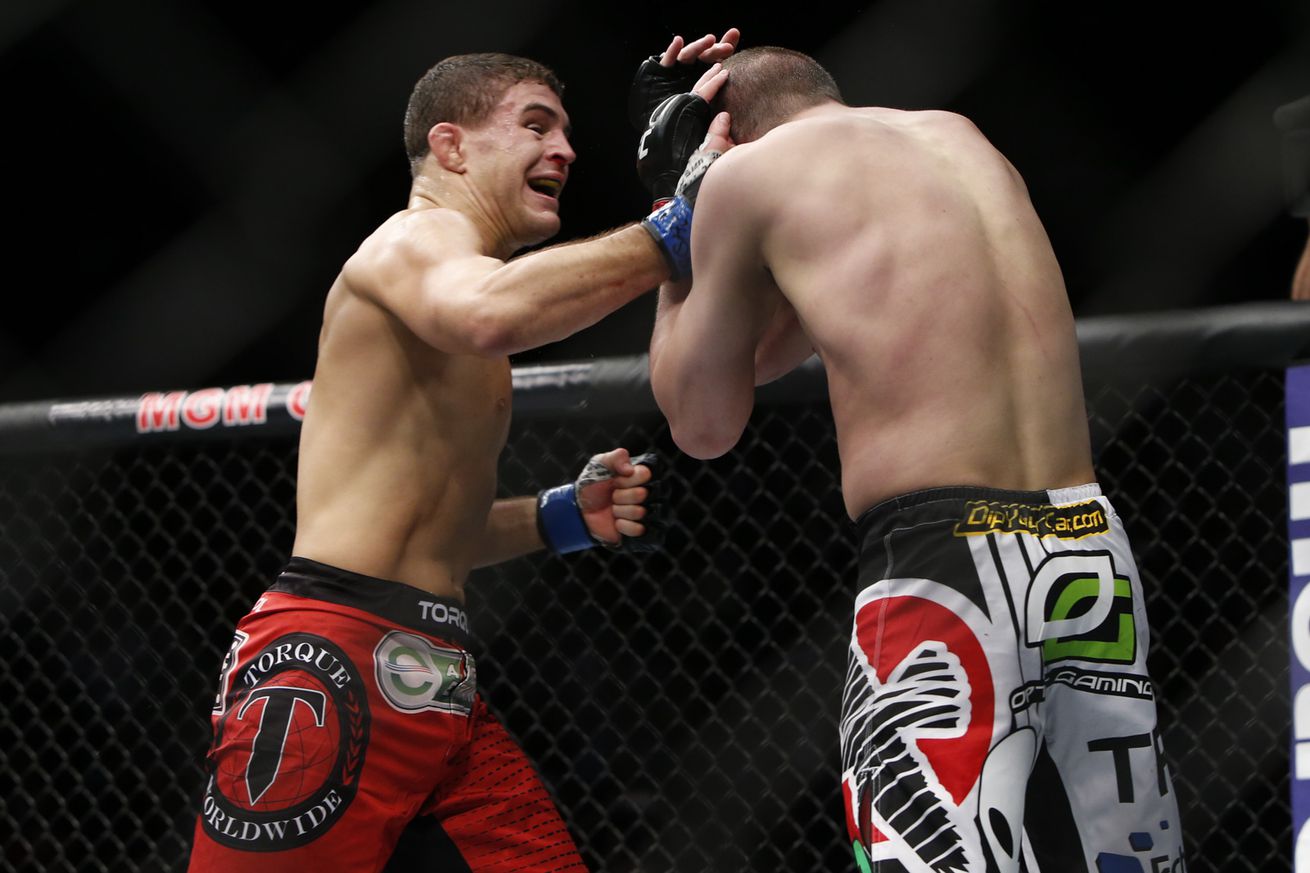 Al Iaquinta wanted to go skydiving at 4 a.m. in Las Vegas this weekend. Given the hour, the facility wasn’t open, so he ended up hanging out at the bar at the Sapphire Gentleman’s Club.

It was there that Iaquinta came up with a comparison: given his current situation, the UFC is like how he views a strip club.

“Do you want to f*ck?” Iaquinta told Ariel Helwani on Monday’s edition of The MMA Hour. “Let me know. Until then, I’m sitting by the bar. I don’t care.”

Iaquinta attended the UFC Athlete Retreat this weekend, but didn’t stay long. He left Saturday’s sessions for a number of reasons, he said.

“I felt uncomfortable being there,” Iaquinta said. “Anxiety, man. In my head, I was losing my mind. I had to go.”

The catalyst for his departure, Iaquinta said, was the announcement of New York’s Hospital for Special Surgery as the UFC’s official hospital. It was that hospital that Iaquinta wanted to go for knee surgery and the UFC did not want to fully pay for the procedure, Iaquinta said. “Raging Al” said when he heard that announcement he felt like he was in some kind of Twilight Zone.

“I look around,” Iaquinta said. “I’m like, are you f*cking kidding me? I made that whole thing happen. I’m the one who put them in touch with the UFC.”

Another thing that upset him was the Snoop Dogg concert that was scheduled to cap the weekend and retreat Sunday night. Rather than paying Snoop Dogg for a concert, Iaquinta would have preferred the UFC gave that money to the fighters.

Iaquinta, 30, seemed to mend his fences with the UFC two weeks ago at UFC 211 in Dallas. Photos were posted on social media of Iaquinta hanging out with UFC matchmaker Sean Shelby and exec Reed Harris. But Iaquinta isn’t so sure if all is well. He said he likes Shelby — “I hope anything I do doesn’t look bad on him,” Iaquinta said. — but was hoping he would be getting a new contract.

Iaquinta said he was texting with UFC president Dana White and White said the two of them were cool, but he was hoping for a sitdown meeting while he was in Las Vegas. The Long Island native thought if he went to the UFC Athlete Retreat that he’d maybe get to talk about a new deal. It didn’t happen.

“I kind of agreed to come [at UFC 211], but I never should have,” Iaquinta said of the retreat. “I agreed to come thinking by the time I came things would be re-done. I’d have a new deal. I’d have something.”

Iaquinta said he confronted some of the fighters he has called out on Twitter at the retreat. He said he slapped food out of the hands of Kajan Johnson and got into a discussion with Mike Perry. Iaquinta said he actually likes Perry and had a good conversation with him, but isn’t sure if a fight against him will come together.

Whether Iaquinta even fights again in the UFC is still unclear. He said his real-estate job is paying dividends and he has five closings this month. Iaquinta said sticking with that and not fighting is likely right now, though it could change.

Iaquinta (13-3-1) knocked out Diego Sanchez last month after a two-year layoff due to injury and semi-retirement. He’s still one of the best lightweights in the world. Iaquinta has won five straight, including four knockouts.

At the retreat, Iaquinta said he heard people ripping the Reebok apparel deal and laughing about how bad it is. These are things he has said in the past and he feels like he’s “representing” his peers in his disputes with the UFC.

With his ability in the Octagon and willingness to step up and talk about inequalities, Iaquinta doesn’t understand why he’s not getting the support and compensation that is warranted.

So, he thought the retreat could be a positive thing, that he would have been able to make his case for a better contract there. It didn’t work out like that, but Iaquinta did still end up hanging out with a Sapphire dancer, going on rollercoasters in Las Vegas.

“This is retarded,” Iaquinta said. “I should have never came here. But I had a great time. What are you gonna do?”