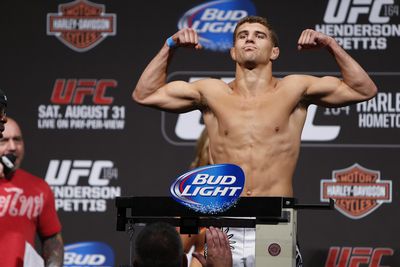 MMAFighting.com’s Ariel Helwani confirmed the news, reporting that Iaquinta hopes to return to training in three to four months. Currently, Iaquinta is eyeballing a July return to action inside the Octagon.

The Team Serra-Longo product has been out of action since April 4’s UFC Fight Night 63 event in Fairfax, Va., where he defeated Jorge Masvidal via controversial split decision before issuing a now-famous post-fight tirade.

Following that victory, Iaquinta (12-3-1) was scheduled to compete at UFC Fight Night 71 in San Diego, but an injury to Bobby Green and a failed drug test by replacement opponent Gilbert Melendez left him without an opponent for the event. Following this series of events, Iaquinta opted to take the time off to repair a lingering knee issue.

Before the split-decision victory over Masvidal, Iaquinta rocketed his stock inside the UFC’s lightweight division by defeating Rodrigo Damm, Ross Pearson and Joe Lauzon in consecutive bouts, with each victory coming via TKO.