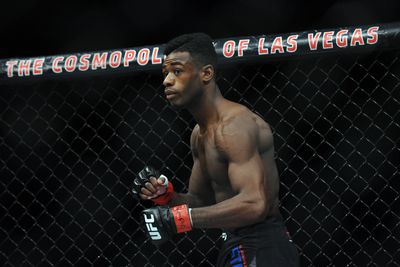 “The Funk Master” is up to his old tricks yet again.

No stranger to using social media as a tool to acquire fights, No. 5-ranked UFC bantamweight contender and recent free agent, Aljamain Sterling, is once again up to his old tricks.

“The Funk Master” is bringing the heat, launching verbal shots the way of oft-injured Brazilian, Raphael Assuncao, via his Twitter account over the last week, saying he’s “game” for a No. 1 contender fight.

However, things got ugly in a hurry after both Raphael, and now older brother Junior, retaliated by questioning the American’s credibility and four-fight win streak.

@FunkMaster_UFC @Wilfguy U seem very vocal about # 1 contender fight but a bit more than 3 fight W streak to inquire. I’m the # 1 Cont

@assuncaomma @RaphaAssuncao 4 wins you clown. And 3 finishes in a row. Respect the game or watch your brother in pain! #DabBoy

The younger brother of the pair of Brazilian grappling standouts, Raphael, is the No. 4-ranked bantamweight in the 135-pound division. He owns signature wins over Bryan Caraway and current champion, T.J. Dillashaw, but has yet to fight since his unanimous-decision victory over “Kid Lightning” in Oct. 2014.

Getting paid, though, has been a point of concern for the free agent Sterling, who once considered ….View full article