Home MMA News Aljamain Sterling feels painted into corner, but vows to ‘beat the sh*t’ out of Renan Barao
ShareTweet 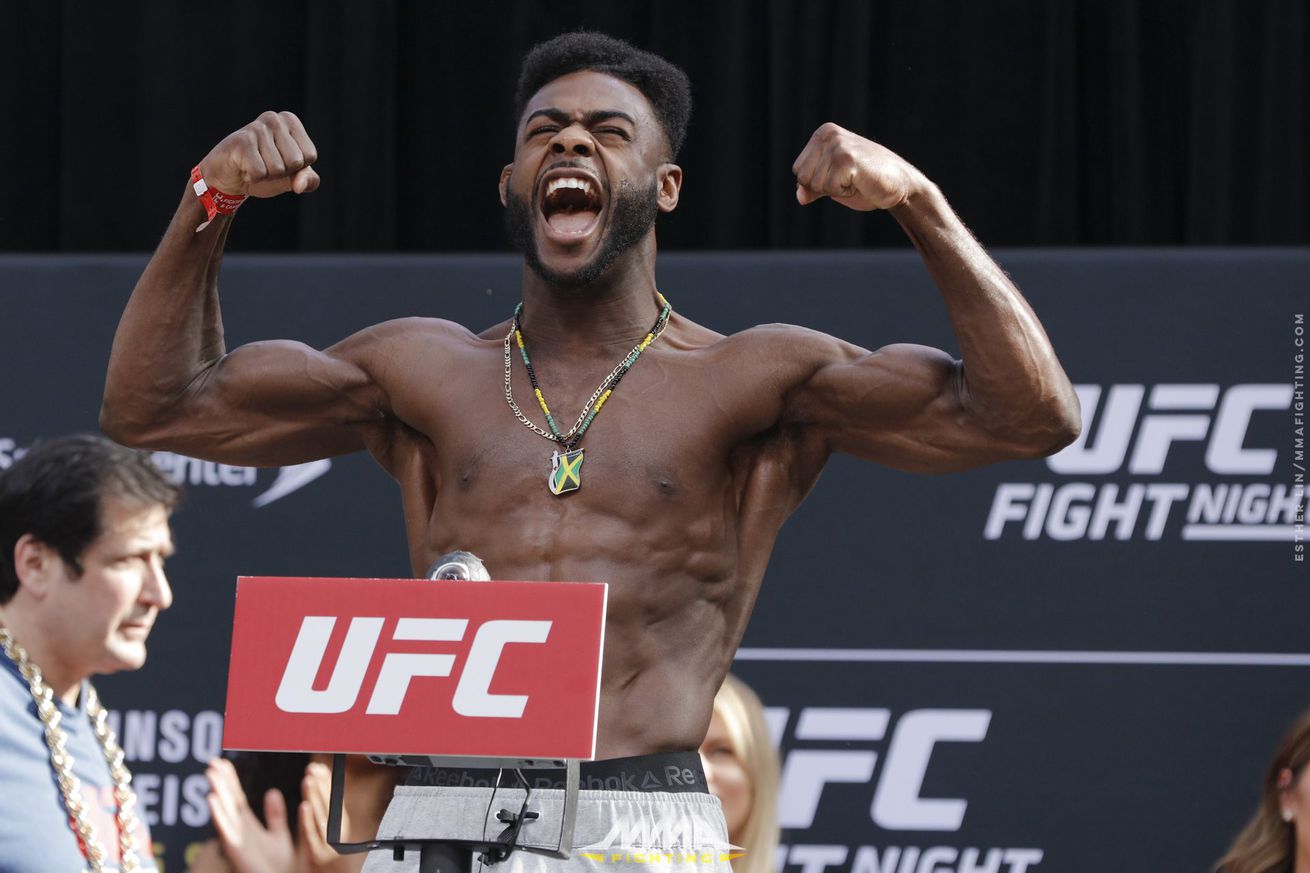 Aljamain Sterling doesn’t love the position he’s been put in leading into UFC 214 later this month. At this point, Sterling said, fighting Renan Barao on July 29 might prove to be therapeutic.

“If his coaches or his Google Translator isn’t working for him to understand what I’m saying, that’s on him,” Sterling told MMA Fighting. “Either way, he’s gonna get slapped. I can’t wait to get in there and f*cking just slap him. And then I’ll feel better.”

The fight between Sterling and Barao was originally booked as a bantamweight bout. But the California State Athletic Commission put the kibosh on that. Barao slipped and hit his head while cutting weight for a title fight in California back in 2014. CSAC just passed a 10-point plan to combat extreme weight cutting and would not allow Barao to fight at 135 pounds.

Sterling said he just found out about this issue relatively recently. He was operating under the assumption for weeks that he’d be cutting to 135 to fight Barao. The UFC proposed a catchweight of 140 pounds and Sterling said he would do it — if the UFC paid him more.

The UFC said no, offered another date (UFC 215 on Sept. 9 in Edmonton) and even threatened to pull the bout altogether, Sterling said. Eventually, Sterling said he verbally agreed to fight Barao at 140, but he has not signed the contract yet.

After Sterling came out with the news this past week on Instagram, Barao wrote his own post, calling Sterling a “coward and liar.” The Brazilian former UFC bantamweight champ chastised Sterling for asking for more money.

Looks like the commission is making the weight cut easier for Barão ‍♂️ Bantamweight, featherweight, or catchweight, it doesn’t matter to me! Either way the commission isn’t gonna stop me from putting this guy on his back and dropping some hellbows on his face! Lets see who wants this shit more!!! YOU HAD YOUR TIME!! É a minha vez! — #ufc214 #HumanAnaconda #ProtectYaNeck #PTP #grind #lifestyle #STRONGISLAND #ny #anaheim #cali #funkjitsu #happyhumpday #sooncome!

Sterling, 27, is baffled as to why asking to be compensated for a change in weight — which he believes favors Barao — is so absurd.

“Those guys don’t know what the f*ck they’re talking about,” Sterling said. “I don’t think they understand what sport we’re doing, what the goal is. I don’t know what their goal is. Just to fight? They just want to fight just to fight? I don’t know. Go do some backyard brawls or some shit. I’m in this to change my life, to change my fortunes. I’m not in there to just fight for free. I fight for people’s entertainment, but at the same time that entertainment comes at a cost. I got to the pinnacle of the sport for a reason and that’s to make money. I didn’t come here just to give handouts.”

Sterling (13-2) said he has 19 siblings and his mother’s work visa recently expired. He could really use the money to help out his family. And he believes he was asking for a reasonable amount.

“You got [UFC president] Dana [White] bringing snow to Las Vegas and having Kendrick Lamar perform at his house, while I’m trying to ask for $10,000, 20,000,” Sterling said. “And that’s such a big deal? To fight a guy who’s a former world champion, I think that’s more than fair.

“I want to fight him at the weight class that makes sense. I don’t think there’s anything wrong with that. I don’t think there’s anything wrong with asking for money, to get paid and compensated for fighting up four pounds, which means he gets a little bit bigger. I get to get a little bit bigger, too, but I feel like cutting down to 136 is an advantage for me, because I can recover a lot better than he does.”

While Sterling feels like he’s being put in a corner, he now wants to fight Barao more than ever. This was the fight he wanted, Sterling said, so Barao calling him a coward makes no sense. Sterling said he was also offered John Dodson, but he chose Barao because he’s a former titleholder. “Funkmaster” believes he represents a bad matchup with his wrestling and grappling for Barao.

Sterling hasn’t signed the contract for 140 pounds yet and the fight is only four weeks away. This isn’t what he wanted — he would have liked a bantamweight fight or more money — but the thought of fighting Barao might be motivation enough.

“Featherweight, catchweight, 135,” Sterling said. “I just want to fight the guy at this point. He wants to run his mouth and say all this stupid shit, we’ll see who’s who and we’ll see who’s gonna do what. “