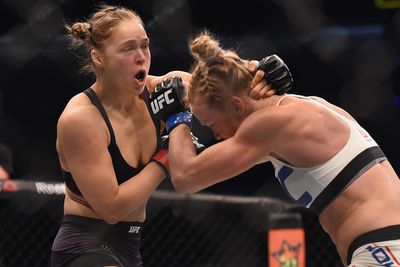 He also tells her to stand up her head, whatever that means.

And “The Spider” knows a thing or two about getting creamed in the big spot. Silva was once considered the best fighter alive, until an undefeated (and unheralded) wrestler named Chris Weidman ended his reign of terror with a fist to the face at UFC 162.

To that end, the Brazilian asks Rousey to learn the same lesson (via Instagram).

“Our biggest glory doesn’t lives in the fact of never fall down, but in the fact of we always stand up after each fall. With determination, You will overcome this bad time. I know very well how it is. You are a great athlete and transcend the MMA world. My kids love You. So, don’t forget: To fall makes us stronger to stand up. You deserve the best of this world. Nobody is forever. All of us lost and to lose ….View original article