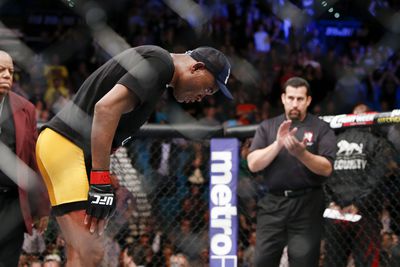 Anderson Silva will return against Michael Bisping in the headliner of UFC Fight Night 83 on Feb. 27 in London, UFC president Dana White announced Thursday on Twitter. The card will air exclusively on the UFC Fight Pass digital subscription service.

Silva (33-6, 1 NC) is coming back after a year out of action due to a suspension for performance-enhancing drugs. The former UFC middleweight champion and all-time great tested positive for steroid metabolites before and after his fight with Nick Diaz at UFC 183 last January. His win against Diaz was overturned into a no contest. Silva, 40, owns the record for most title consecutive title defenses (10) in UFC history.

Bisping (27-7) has won two in a row and is coming off a split decision win over Thales Leites in July. The England native has not fought in his home country since 2010. Bisping, 36, has been one of the top middleweights in the world for the last seven years or so. “The Count” was initially supposed to face Gegard Mousasi on the London card until this change. It’s unclear what will happen with Mousasi now.

Silva was rumored to be facing Vitor Belfort on an upcoming Brazil show. With Silva facing Bisping, that could open up a middleweight title fight between new champion Luke Rockhold and Belfort. The two are rivals and Rockhold has requested the rematch after losing to Belfort two years ago by knockout.

Silva vs. Bisping will be, by far, the biggest main event in the two-year history of UFC Fight Pass. It’s an indication that the UFC could be making a big push with the service in 2016. The last event, UFC Fight Night 80 earlier this month, featured another solid main event ….View full article