Home MMA News Andre Pederneiras says T.J. Dillashaw needs to clean out his division before he gets a fight against Jose Aldo
ShareTweet 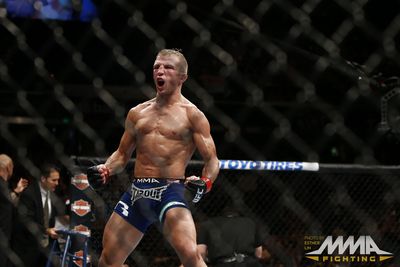 There’s no denying that UFC bantamweight champion T.J. Dillashaw has looked solid since his impressive victory over Renan Barao at UFC 173, winning his last three fights by stoppage.

Dillashaw’s confidence is riding so high that in May he claimed he could defeat both Conor McGregor and Jose Aldo in a superfight. It was a suggestion largely laughed off by Aldo, who said “he has no right to demand anything.”

Sherdog.com recently spoke with Aldo’s coach, Andre Pederneiras, who also put the kibosh on any “superfight” talk with his pupil.

“He should first ask for super fights against guys he lost to, like Raphael Assuncao and John Dodson, who knocked him out,” said Pederneiras.

Indeed, before Dillashaw’s unlikely run to the title, he lost a split decision to Raphael Assuncao, who is currently riding a seven fight winning streak dating back to 2011. For all intents and purposes, Dillashaw leapfrogged the Brazilian to a title shot when Assuncao pulled out of UFC 173 with a rib injury.

As for Dodson, the “Magician” cast a spell on the Californian during their TUF 14 Finale fight, knocking out Dillashaw less than two minutes into the first round. However, that fight is fairly typical ….View original article