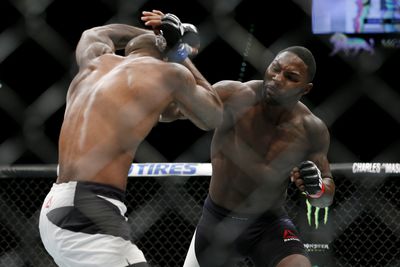 Daniel Cormier wants some time off from fighting. Anthony Johnson is not a big fan of that idea.

“Rumble” told reporters Thursday in Sao Paulo, Brazil that he does not think Cormier should be asking the UFC for a break. Cormier, the UFC light heavyweight champion, expressed that desire after defeating Alexander Gustafsson via split decision at UFC 192 last month.

“Daniel is his own man,” said Johnson, who lost to Cormier by third-round submission at UFC 187 in May. “I don’t know why he would say he wants six months off. Maybe he wants time to heal, spend more time with his family, train more to perfect his craft. I don’t know. Do I see it as being selfish? No. But I want to say this: I don’t feel like he’s earned it enough to say, ‘I need six months off.'”

Cormier is very likely to get a rematch with former champ Jon Jones next. Jones beat Cormier by unanimous decision at UFC 182 back in January, but was suspended and stripped of the belt after a felony hit-and-run arrest in April. Cormier beat Johnson for the vacant belt at UFC 187.