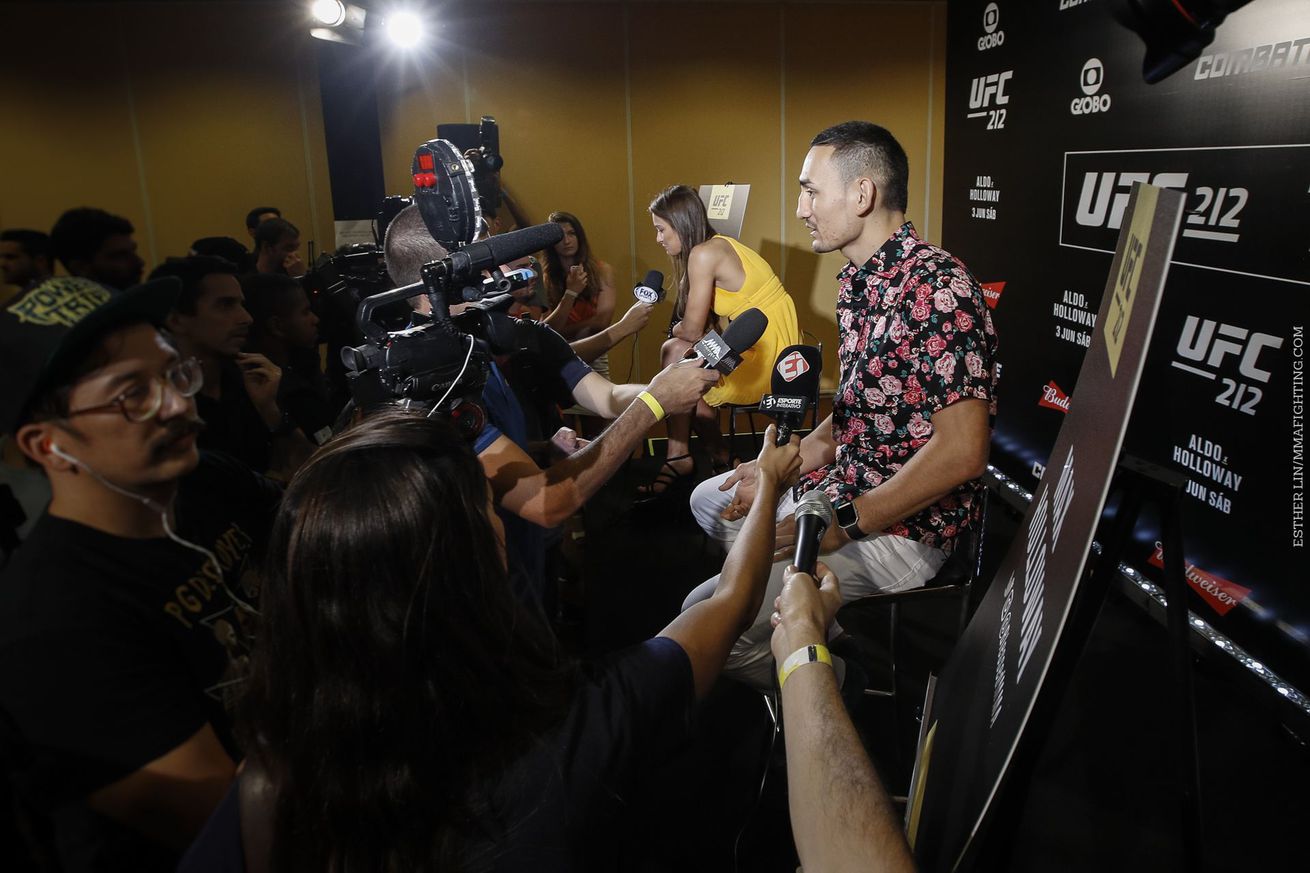 If you follow this sport long enough, certain figures begin to emerge as personalities — the kinds of figures who at first fall victim to their own tattoos. In the case of Alan Belcher, he never could quite transcend that tattoo of the bloated Johnny Cash. It was tragic, really, how distracted his audience was by the contortions of that biceptual face.

In the case of Max Holloway, though, winning helps. There was a point where we wanted to give him the Belcher treatment, but he made it hard. It took 10 wins in a row and some wild pidgin speak for him to reach the summit of Mt. Aldo, but here he is at UFC 212, ready to unify the 145-pound title against the greatest featherweight of all time. Through the course of that run Holloway has began to emerge as a cult figure in MMA, converting his quirks into endearments. The wing tattoo that covers his shoulder blades? Just part of the flavor. That Hawaiian slang? Goes into his charm. His “Blessed” nickname? Max’s private game of jinx-counter-jinx. That pencil-thin mustache? A reminder that a maestro is at work, bruddah.

Greatest of all is Holloway’s genuine who gives a shit attitude. He showed up the UFC 206 post-fight presser wearing a gold tie, for crissakes, just to accessorize with the interim belt. That’s some serious eff you flash. He’ll fight anyone, anywhere. He’s entering enemy territory you say, where Aldo never loses? Holloway doesn’t care what you think. He’s in Rio to disappoint the legions and just kind of scribble some sunglasses on the Mona Lisa. He’s in Rio to find the one they call “Scarface,” after a low-hanging fruit campaign to solve the eternal question (in his own mind): “Where’s Jose Aldo?” He’s there to cure the “pussy-itis,” which, by the way, is one of Max’s greatest “Maxisms.”

While Conor McGregor spent his time recovering from the torn ACL he suffered in his fight with Holloway by setting fire to the entire featherweight division via his Twitter feed, Holloway himself just started kicking ass. He took out Will Chope, and to this day people thank him for it. Andre Fili, Clay Collard, Akira Corassani? He turned them all to filler. Cole Miller was tough, but not tough enough. Cub Swanson? Cub ended up getting choke by those Hawaiian vines that Holloway calls his arms. Charles Oliveira had that weird neck thing happen, which was unfortunate, but Jeremy Stephens had no answers for Holloway.

Holloway treated Ricardo Lamas and Anthony Pettis as springboards to Aldo. And so here it is: Holloway versus Aldo. The old “be careful what you wish for” mantra is implied, but if ever there’s a guy who doesn’t think that way, it’s “Blessed” Max Holloway. He wants to do harm to the man he believes pulls out of too many fights. Who leaves the UFC high and dry to often. Who is always saying things that he doesn’t intend. A false prophet, in other words. Holloway wants to punch a lie.

It’s a great match-up. One of the best in featherweight history, really, and by far the biggest where no Irishmen are involved.

Which of course carries its own subtext.

Before McGregor came along, the featherweight division wasn’t exactly a booming dancehall. Aldo was great, but humanity at large only truly got interested in him when McGregor entered the picture and was threatening to evict him. Though Aldo himself has become outspoken in his own way, Aldo the champion wasn’t much of a media sensation (there’s an English barrier, yes, but there was also a measure of grumpiness that was slightly off-putting).

To return to the Aldo as King featherweight division means a return back home, to the Norm before the McGregor Storm. That would be fine, though challenges from Cub Swanson or Frankie Edgar are playbacks with diminishing returns. What Holloway is trying to do isn’t just dethrone the king, but to freshen up a division — to give it new possibilities, post-McGregor.

That changing of the guard is nestled into the stakes. To go back to how it was before, or to take flight on the back of the game’s quirkiest wings.