Home MMA News B.J. Penn: Yair Rodriguez fight is ‘going to look like a professional against an amateur’
ShareTweet 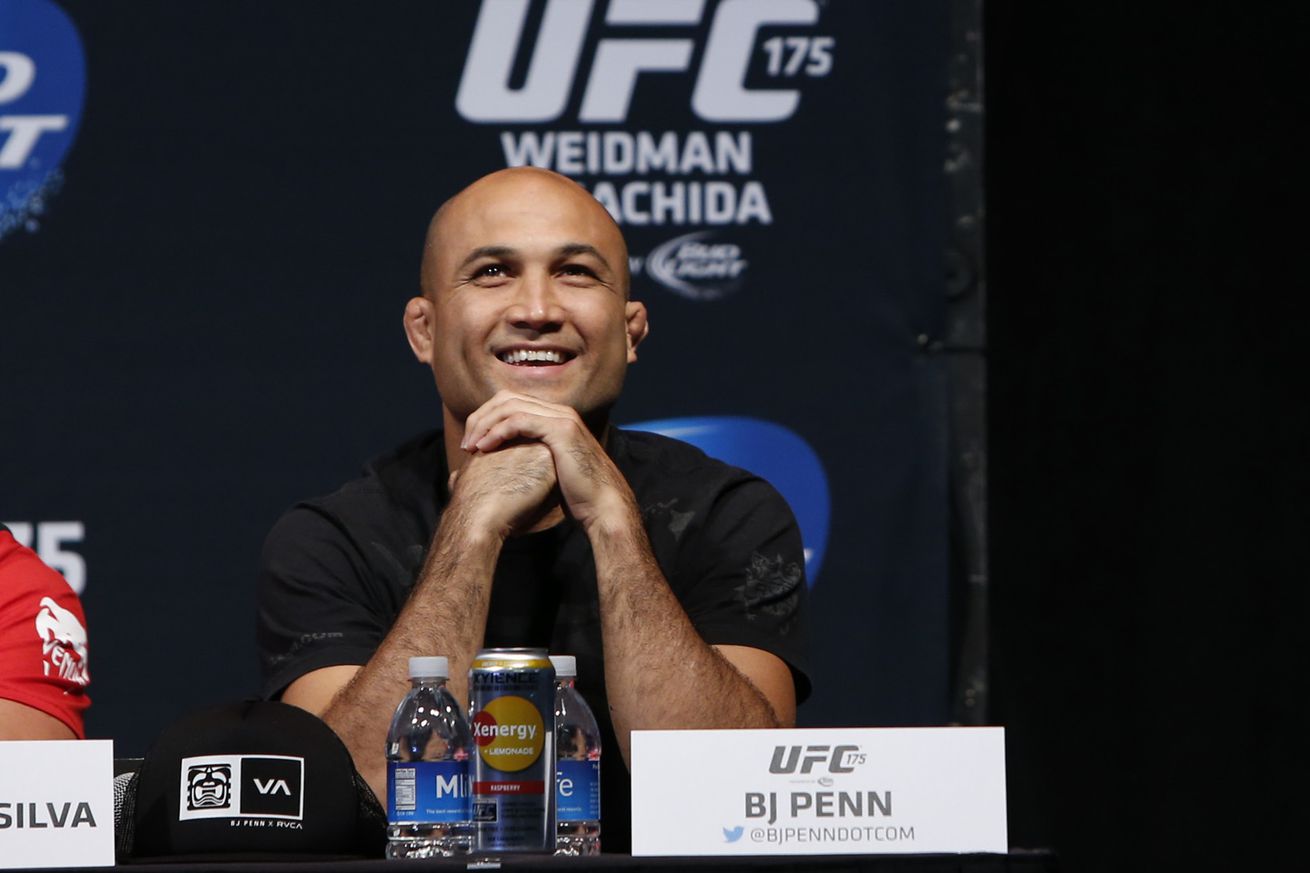 There were plenty of grumbles heard around the fight game once the UFC booked B.J. Penn for his latest comeback attempt at UFC Fight Night 103. After shuffling through a broad spectrum of opponents, from declining veterans to genuine contenders, Penn somehow ended up with the most puzzling match-up of all: a dance date against the one of featherweight division’s longest, most athletic, most offensively ferocious prospects, 24-year-old Yair Rodriguez.

But ahead of UFC Fight Night 103, Penn brushed aside any criticism of the Rodriguez booking. The fight wasn’t surprising at all, he explained, because Penn heard rumblings about the possibility weeks before it even became a reality while working within the halls of Rodriguez‘s old Albuquerque stomping grounds at the Jackson-Winkeljohn gym.

“I think Yair and his manager saw me training at the gym (at Jackson-Winkeljohn) and thought, ‘this guy doesn’t have it anymore. Let’s fight this guy. He’s a big name, and let’s try to make our name off his.’ And that’s exactly how this fight got put together,” Penn told MMA Fighting ahead of Sunday night.

“Some people from the gym said, ‘hey, Yair is a p*ssy, he’s going to try to fight you because he thinks you’re older,’ and this and that. ‘His manager is trying to push for the fight.’ And I go, really, huh? I was talking to my buddies in Albuquerque, and then the UFC called me two weeks later and offered me Yair. That’s what it was.

“I don’t take it as disrespect,” Penn added. “I just laugh. And let’s just see. Let’s see if his intuition was correct.”

Rodriguez himself has disagreed with that particular version of events, stating that he too was surprised to be the one selected to face the UFC Hall of Famer. But that does not change the fact that the leap in stature from Penn’s initial opponent last year, Dennis Siver, to Rodriguez is a hefty one to make.

The young and creative Mexican holds a perfect 5-0 record in UFC competition, and his April flying switch kick knockout of Andre Fili was one of the nastiest finishes in a year full of nasty finishes. However, Penn has made a career out of embodying the “just scrap” mentality that has become increasingly rare in today’s modern game, and he said he never once thought for a second about turning down the opportunity.

“I think what it is, people look from the outside, and they don’t really look in,” Penn said. “And they’re like, really, how many people has Yair knocked out? Really, how hard can he hit? Really, how much this, how much that? How much experience? But they don’t add these things up. And a lot of people want what they want, and maybe for their perfect world, it’s not for me to be champion again. In their perfect world, somebody else has to be the champion, and that’s just what you get. But that’s sports. There’s nothing wrong with that, that’s part of the game.

“But it wasn’t surprising because you never know who they could match-up with somebody like me. You know what I mean? You could give me anybody. That’s the reputation we carry with us, and the faith of the company, that they know we can handle ourselves in that Octagon. It was never a surprise whenever they offer anybody. Anybody they ever offer me in fighting, I’ll probably never be surprised, unless it’s the guy’s first fight in the UFC.”

Barring any major betting swings, Penn will be the heavy underdog heading into Sunday — several oddsmakers have him listed as high as 4:1, the longest odds Penn has ever faced in his UFC career. And that is not particularly surprising considering Penn’s recent comeback attempts. The 38-year-old legend is just 1-5-1 since 2010, and nearly six years have passed since “The Prodigy” last captured a victory in any sanctioned fight. But with what will likely be his final chance to write a storybook ending upon him, Penn refuses to dwell in the past.

“I used to watch [my old fights] before, back in the day. I don’t know how many times I watched that first fight, me when I fought (Matt) Hughes and got the belt. I must’ve watched that so many times. But I haven’t seen any of my fights for years, and I haven’t been watching my fights that I lost, the fights that happened in the last five years,” Penn said.

“I wouldn’t want to sit there and just talk about the past, and say ‘oh, look how good I was,’ or, ‘I could’ve kicked your ass if it was back then.’ No, and I don’t [want to think] of excuses. I mean, look at Dan Henderson, Mark Hunt, Fabricio Werdum. All those guys. How can I have an excuse? They’re all in there. They’re all in their forties.”

The idea of a motivated B.J. Penn is one that has long tantalized fight fans, many of whom have gone through this luckless ride with Penn before. Only time will tell if this iteration is any different than the last, but it is clear that Penn believes he has put his best foot forward for the first time since the championship days of his decorated career. His work with respected coaches Greg Jackson and Jason Parillo consumed most of his 2016, and it certainly hasn’t hurt that many individuals in Albuquerque are intimately aware of the nuances in Rodriguez’s unique game.

So when Penn looks at the killer standing across from him at UFC Fight Night 103 — a blue-chipper who has built an entire career in the time while Penn was away — he sees a youngster with plenty of talent and potential, but also one who is over-confident and doesn’t fully grasp what he is about to get into.