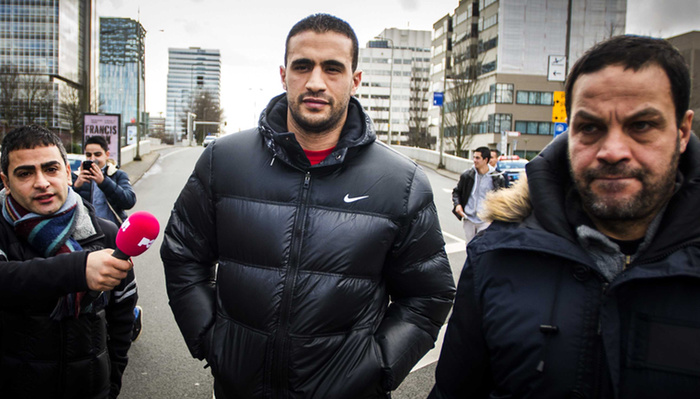 Last week former K1 heavyweight champion Badr Hari landed himself with a prison sentence for yet another assault against an innocent bystander. But, it appears that didn’t keep him on the straight and narrow.

According to the Moroccan press, the below video purportedly shows the six foot six kickboxer in Casablanca aggressively approach an innocent hotel receptionist before slapping him just days before sentencing in the Netherlands.

The Amsterdam-raised fighter had recently hit the headlines in a less sinister way as he grabbed headlines across the world when gallivanting with soccer superstar Cristiano Ronaldo at various Moroccan resorts.

However, Hari has a well-earned reputation of being a self-admitted hot head with eight criminal charges of violence to his name—hence earning his badboy moniker. These include assaulting his ex-girlfriend Rosa before damaging her property on July 9th 2011. Eight days later, Hari was accused of beating up the owner of Club Air and an Italian patron.

The incident that led to Hari’s sentence happened in 2012 when he attacked Dutch millionaire Koen Everink at a dance event in Amsterdam. Everink sustained a broken nose, a fractured eye socket, a broken ankle and some leg injuries from Hari’s vicious assault with ….View original article