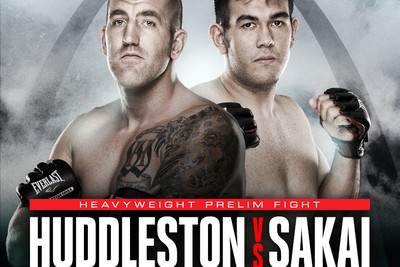 The Spike TV-televised main card already featured a Featherweight trilogy match between Patricio Freire vs. Daniel Straus after big wins for both men at the “Kimbo vs Shamrock” event several months ago. Freire isn’t the only one defending a title that night as a “pissed off” Will Brooks puts his Lightweight title on the line against Marcin Held.

Several long-awaited showdowns were recently added to the Bellator 145 line up, including rematches of Michael Chandler vs. David Rickels and Bobby Lashley vs. James Thompson, as well as an important Featherweight showdown between Pat Curran and Justin Lawrence.

All five of these fights are now bolstered by a seven match ‘Prelims’ card that will air on Spike.com.

The featured bout of these prelims will be Missouri brawler Alex Huddleston (6-1) vs. Brazilian prospect Augusto Sakai (8-0). Both men picked up wins at Bellator 139: “Kongo vs. Volkov” and seemed destined to meet later on down the line, with one of the two moving further up the ladder toward a title shot against Vitaly Minakov.

Other interesting bouts added to the card include former The Ultimate Fighter ….View original article