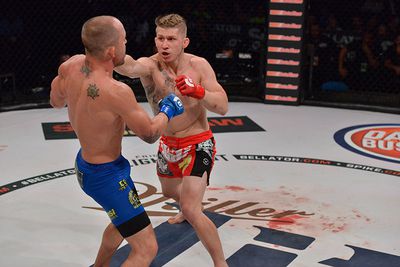 “American Kidd” chats with MMAmania.com about facing replacement opponent, Emmanuel Sanchez, at “Vengeance” this weekend … and much more.

One match that doesn’t fit into either of those categories is Justin Lawrence vs. Emmanuel Sanchez; nonetheless, it’s a critical Featherweight showdown worthy of the Spike TV treatment.

Lawrence was supposed to battle Pat Curran in the featured Featherweight fight, but when “Paddy Mike” had to withdraw with an injury, Sanchez stepped up on short notice, having just beat Henry Corrales at Bellator 143.

Meanwhile, Lawrence returns to the venue where he made a successful Bellator debut, needing just one round to finish veteran fighter Sean Wilson. The Pacific, Mo., native received a rousing ovation in St. Louis for the finish.

Lawrence spoke with MMAmania.com before his Bellator MMA debut (read it here), and he is back today to talk to us again about moving up from the undercard to the main card and how he plans to handle Sanchez.

“I feel like it’s a really big ….View original article