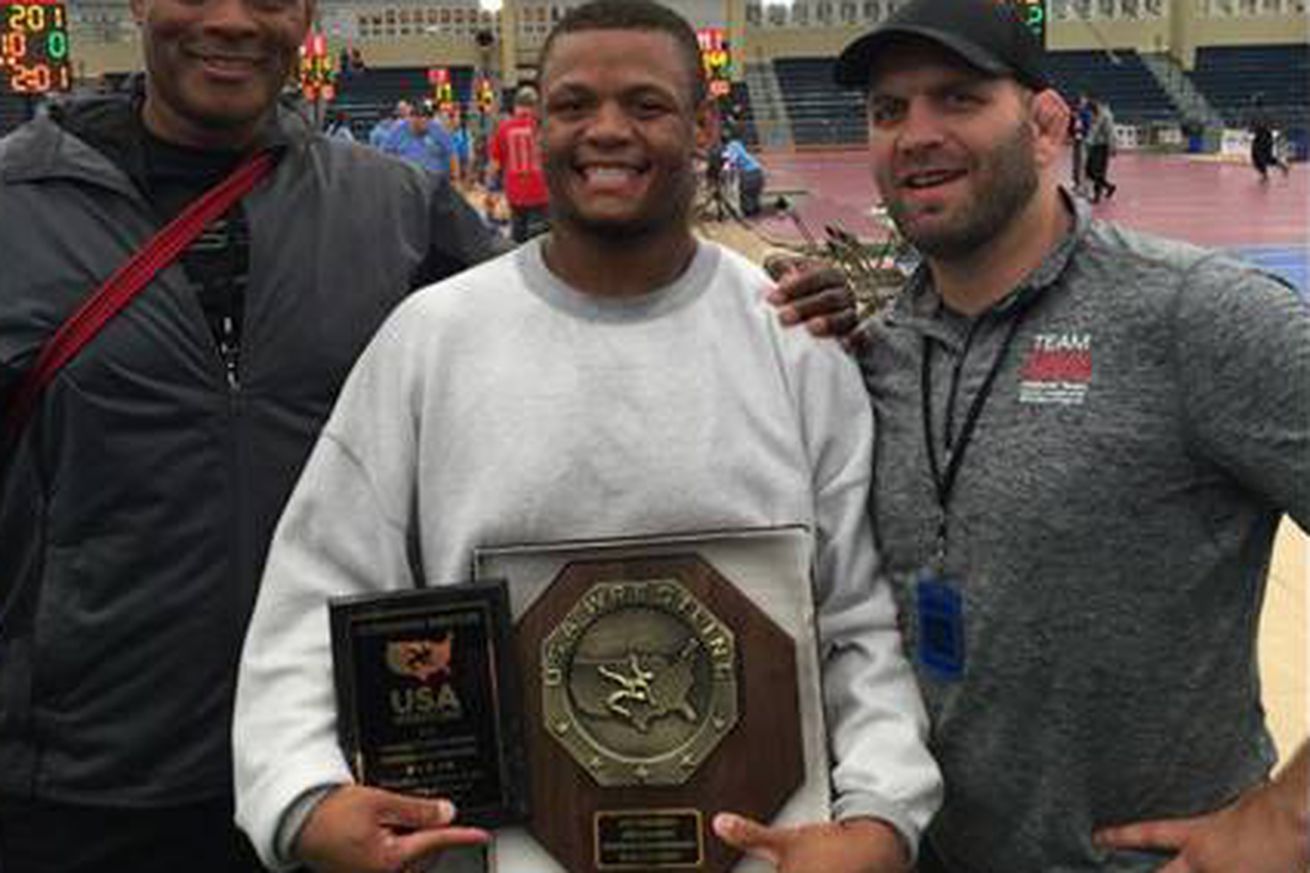 When Bellator MMA thinks highly enough of an up-and-coming fighter to tout the signing in a press release, the pressure is on to perform. His amateur credentials give the promotion good reason to be excited — he was a three-time All-American wrestler at Central Michigan University and a national champion at 120 kg (264 pounds) before turning professional.

Now it’s up to Trice to meet those expectations of that outstanding amateur background. Speaking to MMAmania.com, Trice was excited about making his debut in Thackerville … no matter who he fights.

That new opponent is Tommie Britton, who like Trice is also making his pro debut, hailing from nearby Oklahoma City. Trice says the change of fighter doesn’t change a lot about his debut fight.

“Not at all man. My gameplan stays the same. Go in, dominate, put on a show man for the fans. That’s the gameplan, you know? Taking it one day at a time, and believing in my coaching and training, putting me through the process of winning this fight.”

After his college days and before his signing with Bellator MMA, Trice took a little time to drop by the Cyclone Wrestling Club in Ames, Iowa, to workout and hone his skills on the road to going pro.

“I had a great experience working with K.J. and Trent Paulson, it was a great time. I originally went there to help out one of my boys from growing up in Highland Park (Michigan), a kid that I helped learn wrestling growing up. He’s actually the Heavyweight at Iowa State right now. I learned a lot of things from Kevin Jackson, especially about preparing for matches, mental toughness. K.J. fought in UFC back in the day so we talked a lot about fighting as well.”

Jackson had a six-fight UFC career, going 4-2 and facing Frank Shamrock to crown the inaugural UFC Light Heavyweight champion. In other words, he is not a bad guy to get advice from. Trice is ready to put that mental toughness to the test. Now that Ed Ruth and Tyrell Fortune have both won their pro debuts, he knows the comparisons will come, even though the latter is a friend and teammate.

As a teammate, I asked Trice to evaluate Fortune’s one-sided performance in his Uncasville debut.

“I actually think Tyrell should have let that guy stand up so he could show off his hands a little more [chuckling]. He’s been training with me for a few months now, man. I talked him into coming to my gym, he finally came in, he checked it out and he liked what he saw. He saw how good my hands got so fast so he wanted a part of it. I just think Tyrell should have let him up just to beat him up with his hands a little more, but you know it was a dominating finish for Tyrell — and the same for Ed, man. Ed did really well, too.”

Speaking of his hands, I asked Trice if there are any strikers he has tried to emulate as he makes the transition from wrestling to MMA.

And out of all three, the one he spoke about the most may be the best to emulate — the Mayweather style of being elusive when an opponent tries to lay hands on you.

“Exactly, man. He perfected the game. He changed it all. He made boxing what boxing is. Boxing is to hit and not get hit, and most guys want to see a brawl, that’s what most guys in MMA do (is) brawl. But, I’m excited either way — I can get in there and brawl or I can be a finesse type of guy, whatever I have to do to win.”

For Trice the most important lesson he’s gleaned from other fighters may be staying patient in a fight.

“From what I’ve heard from old school guys (and) top guys in MMA, you can’t go in thinking like you’ll get a knockout. Most guys tell me the knockout usually comes when you’re not really looking for it. I plan on getting the finish, though, man. Everyone else got a finish — I want to be the first out of all of us to get a knockout finish.”

Find out December 3rd when he fights an opponent Trice dubbed “Tommie He-Goes-Down” in today’s interview.

Complete audio of the interview embedded in the video player above and complete Bellator MMA coverage can be found right here on fight night.