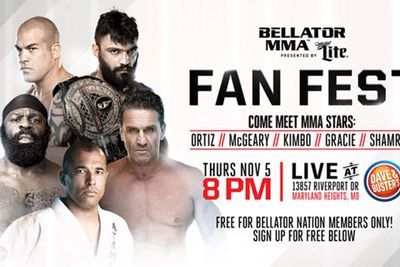 Bellator 145: “Vengeance” is coming to the Scottrade Center in St. Louis, Mo., on Nov. 6, 2015. The Spike TV-televised show will feature Featherweight and Lightweight title defenses for Patricio Freire and Will Brooks, respectively, as well as several other popular fighters such as Michael Chandler, David Rickels, Bobby Lashley and James Thompson, among others.

To celebrate the mixed martial arts (MMA) promotion’s return to the same venue where “Kimbo vs. Shamrock” took place in June, Bellator MMA has announced a “Fan Fest” at Dave & Buster’s (D&B) in nearby Maryland Heights on Nov. 5, 2015.

Although the “Fan Fest” is exclusive to Bellator Nation members, enrolling in Bellator’s fan club is free through its website. Members can go to D&B at 8 p.m. ET to meet and greet fighters like Kimbo Slice, Light Heavyweight champion Liam McGeary, Royce Gracie, Ken Shamrock and Tito Ortiz, among others.

Tickets for Bellator 145: “Vengeance” are on sale now at Ticketmaster.com and at the Ford Box Office ….View original article