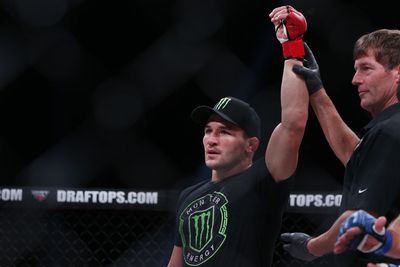 Former Bellator lightweight champion Michael Chandler is considering an opportunity to train with Anthony Pettis at Roufusport, he told MMA Fighting in a recent interview. Chandler, who said he has spoken about it with Duke Roufus, would not be leaving his new gym, Power MMA in Arizona, but he could spend some time in Milwaukee for Pettis’ training camp in preparation for Eddie Alvarez.

Of course, Chandler knows Alvarez better than anyone. Those two had a pair of the greatest fights in Bellator history with that promotion’s lightweight title on the line in 2011 and 2013. Chandler won the first by fourth-round submission and Alvarez won the second by a very close split decision.

Pettis, the former UFC lightweight champion, takes on Alvarez at UFC Fight Night: Dillashaw vs. Cruz on Jan. 17 in Boston. It’s his first bout since dropping the belt to Rafael dos Anjos in March.

“Nobody has spent more time in the cage with Eddie Alvarez than I have,” Chandler said. “Nobody has finished him like I did. Quite frankly, I think I won the second fight, too.”

Chandler (13-3) will not make the decision to head to Roufusport until after his ….View original article