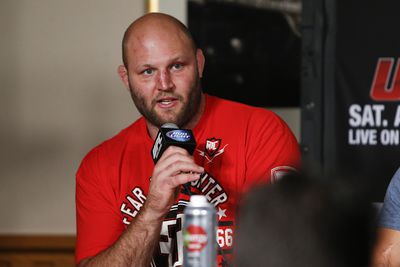 Ben Rothwell will not be competing in Ireland after all.

According to the UFC heavyweight contender, he was informed by the UFC on Wednesday that, while they tried, the promotion simply could not find a suitable replacement for the injured Stipe Miocic. So as a result, Rothwell was removed from the Oct. 24 card entirely. Rothwell said that while he was very disappointed to not be fighting next week, he understood why the UFC had to remove him from the card.

“No hard feelings towards Stipe at all,” Rothwell said. “I’ve been on the other side of the coin. These things happen, and I’d like to hope that everything happens for a reason. Maybe there is a bigger fight for me out there.”

Rothwell reached out to Miocic to wish him well and let him know personally he was not mad at him. He’s unsure whether the UFC will try to re-book them in the near future.

The 33-year-old veteran was told, though, that should any highly-ranked heavyweight pull out of a fight in the coming weeks, he’ll be a top consideration. And Rothwell has eye on one particular matchup.

“If by some act of God Overeem pulls out of the ….View original article