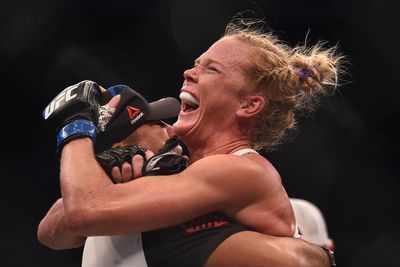 In the third installment of MMAmania.com’s “Top 5s of 2015,” we honor the year’s true standouts, those who either raised their profiles or demonstrated the reason(s) they’re already considered among the best. Let’s have a look at the best biffers of the past 12 months:

It’s not often that getting kicked in the head changes someone’s career for the better, but here we are. Rockhold’s loss to Vitor Belfort sent him on the warpath, and after three dominant finishes in 2014, he entered the current year on the cusp of a title shot.

Lyoto Machida made the mistake of standing in his way.

Even in “The Dragon’s” biggest losses, he’d done some solid work — he managed to drill “Shogun” Rua with good counters in their rematch, rocked Jon Jones, and put together a strong rally against Chris Weidman. Rockhold just straight-up smashed him with impunity before submitting him in the second round.

The American Kickboxing Academy (AKA) product’s performance against Chris Weidman may not have been as dynamic as his earlier efforts, but it was still fairly shocking to see him maul the champ. He broke “All-American,” something nobody had ever even come close to accomplishing before.

Next up is Yoel Romero, and if Rockhold can put away the Cuban Olympian, it’s hard to imagine anyone at 185 pounds stopping him. Except, perhaps, Vitor Belfort?

After all the build up, Cormier’s loss to Jon Jones had to be incredibly tough to swallow. And even without that hanging over his head, taking on Anthony Johnson on relatively short notice is a tall task for anyone.