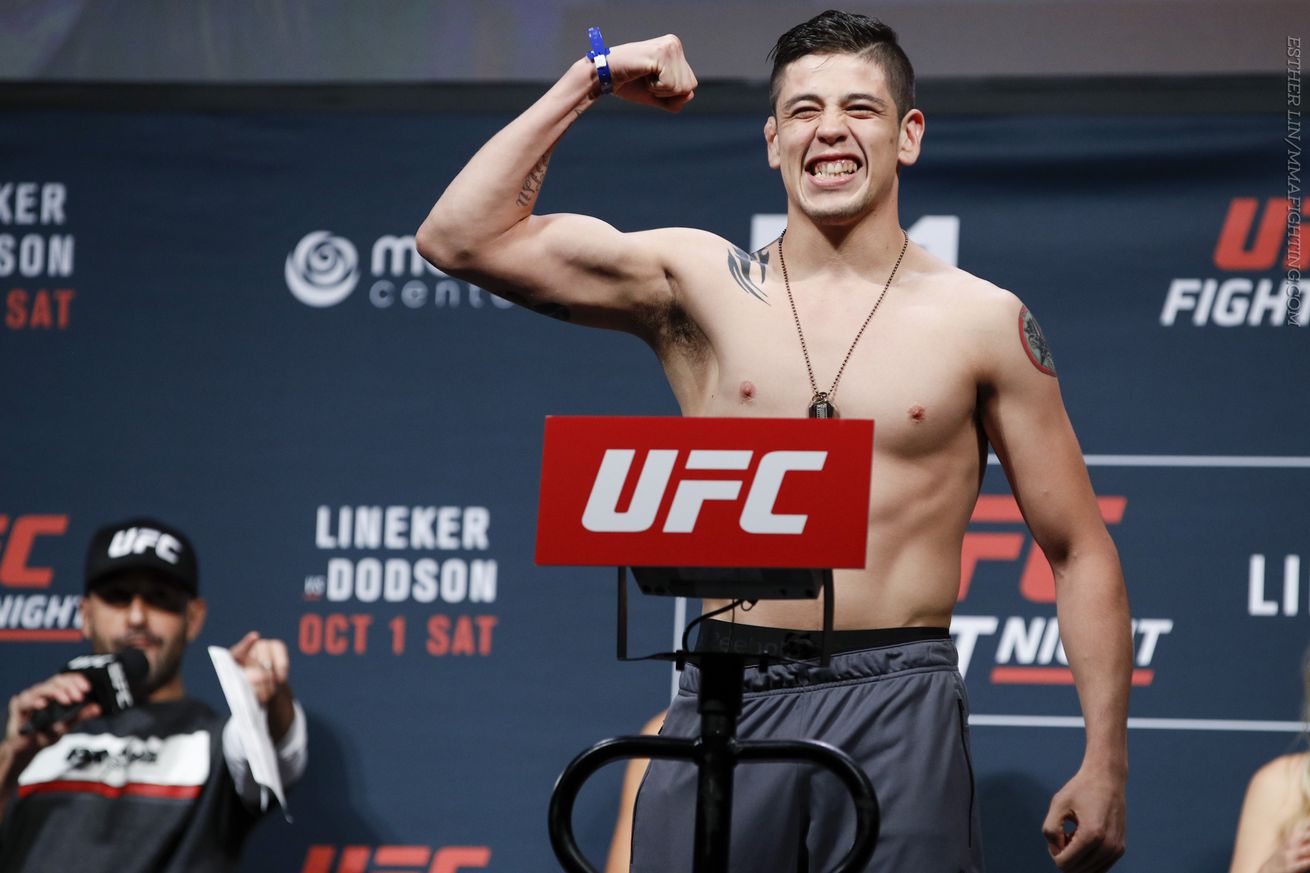 Apart from Tim Elliot, Brandon Moreno might have the best outcome out of The Ultimate Fighter 24 contestants.

Two months ago, Moreno, who was eliminated in the opening round of the TUF 24 tournament, was called to take on a short-notice fight against top flyweight contender Louis Smolka at UFC Fight Night 96. That night, Moreno made the most of his opportunity, and submitted Smolka in the first round of the fight.

Now, the 22-year-old Mexican is entering his second UFC bout as a top-15 flyweight against Ryan Benoit, opening the main card of the finale of the TUF season he lost.

“I’m very happy,” Moreno told MMA Fighting. “There is nothing but happiness in my life right now because I’m very fortunate with my job and with life. Many of my [TUF 24] partners, obviously they can have the opportunity in the future, but right now I’m fighting, and I’m going for my second fight, and who knows when they’ll make their debut, but I’m already contesting my second fight, so I’m very happy about that.

Moreno, who usually trains out of Tijuana, Mexico with Entram Gym, decided to move in with his TUF 24 coach Joseph Benavidez and train with Team Elevation and Duane Ludwig for his upcoming bout.

“Everything came from TUF,” Moreno said. “The coach was Joseph Benavidez, I came out and had a very excellent relationship with Joseph, and he always told me, ‘Whenever you want to train here, you have the doors open, you can stay at my house and we can train together’. So that was super good, but I didn’t have a fight [booked] so I didn’t have a plan to go. But when they told me I got the Ryan Benoit fight, I needed a training camp. It was a hard moment for me because all my team in Tijuana was out of the city. They were actually in Mexico City because three of my training partners were going to fight in the last event that was in Mexico, the final of TUF: Latin America. So all my team was there, and I didn’t have people to train with. I didn’t have enough training partners, so my coach and I decided to go with Joseph, and I did all my training camp there.”

Despite not being 100 percent fluent in English, Moreno had no language or communication issues training in Denver, as he believes the fight language is universal. However, he did experience some issues adapting to the training style.

“At first, it was a bit difficult because it was a totally different style that was new to me, and that I didn’t know,” Moreno said. “But obviously, as time goes by, you get used to the techniques and you learn them. It was a very good experience, I learned new things that I hope everyone sees in the fight, so yeah it was a beautiful experience and he’s [Ludwig] actually going to be in my corner on Saturday, along with my coach from Tijuana, Raul Arvizu, and my jiu-jitsu coach.”

Moreno says that with the new techniques he’s picked up, he’s no longer just a ground fighter, but a complete MMA fighter.

“The truth is that I already went from being a jiu-jitsu fighter to being a complete fighter. My game was completely ground based and I didn’t really use my hands, and now I feel my game has improved a lot and is now leveled as far as my ground and striking skills go. So I’m no longer a jiu-jitsu fighter, I feel like I’m a complete mixed martial artist.”

After his last performance against Smolka, many fans talked about the a possible fight Sergio Pettis for ‘The Assassin Baby’, but nothing ever came to fruition. Now fighting Benoit, who’s unranked, Moreno does wish he was fighting someone that improved his position in the rankings.

“I’m just happy that I’m fighting,” Moreno said. “I know I saw Sergio Pettis’ name thrown out there, but that fight was never offered to me, it was just simply people saying that, but there was never really anything. I’m just happy I’m fighting, but obviously I would have liked to fight against someone in the top-10, someone that gave me a bit more clarity in the future of my career, but I’m very happy that I simply have the opportunity of fighting.”