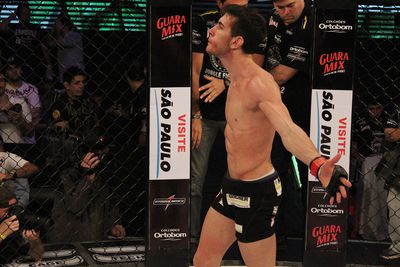 Jonas Bilharinho added another belt to his undefeated record earlier this month, and he intends to continue collecting titles until he gets a call from the Ultimate Fighting Championship or Rizin Fighting Federation.

The 7-0-1 prospect, a former Jungle Fight bantamweight and featherweight champion, stopped Amaury Junior to claim the inaugural 1º Round Combat featherweight title on Dec. 6. Fighting for the first time since undergoing surgery on both ankles, Bilharinho broke Junior’s rib in the opening round, dominating the bout until his opponent quit between the third and fourth round.

“I expected a tough fight,” Bilharinho told MMAFighting.com. “I didn’t have much time to prepare so I focused on my cardio so I would be able to fight a long fight. However, I landed a good kick in the first round and ended up breaking his rib. That advantage, together with my good cardio, helped me dominate the rest of the fight. He’s a fantastic fighter, he was able to fight two and a half rounds with a broken rib, but I felt the fight was under my control every second after that.”

After conquering his third belt in only eight MMA fights, Bilharinho believes he has done enough to earn a chance in the big leagues.

“I would be honored to fight in the UFC or at Rizin,” he said. “I’m waiting for their call. Whoever offers me a deal, I’m in.”

In July of 2014, after winning his first title at Jungle Fight, Bilharinho revealed he was offered a contract by Bellator.

“Man, I got so many offers I can’t remember everything, but the biggest promotion to offer me a deal was Bellator,” he said. “It was one of the first ones. They made me a good offer, especially if you consider I was so young, but I declined because I thought ….View full article