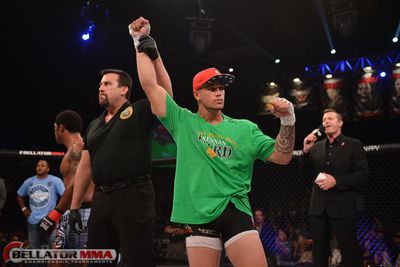 Brennan Ward has fought on five separate occasions at the Mohegan Sun, not far from where he grew up in New London, Connecticut. He won four of those fights, and lost once to Tamdan McCrory. Each time he fights there he brings a good portion of New England in to root for him. It is always a Brennan Ward crowd when Bellator visits the Mohegan reservation.

So when he got the call to fight in Japan on Dec. 29, on the inaugural Rizin card as a Bellator loaner, the 27-year old saw it as an adventure — something well beyond the norm.

“I want to give a shout out to Rich Chou, the matchmaker, for putting me on the card,” he says. “Because, Rich recognized I worked my ass of for Bellator. I put on a show. Dude, I sell Mohegan Sun out, you know what I mean? Five times, six times in a row. So he was like, alright, alright, alright.”

Ward will fight Ken Hasegawa in Saitama, a city made famous by PRIDE FC back in the day. Ward says he never watched PRIDE, and in fact, “I didn’t watch much MMA at all, and still don’t.” But he likes the idea of traveling outside of his home state to compete. He likes the idea of the journey, much like Donald Cerrone, who drove his RV from Las Vegas to Orlando last week for his title fight with Rafael dos Anjos.

“It’s just will be fun, getting out of the country with my boys,” Ward says. “I don’t know, I just like going on adventures man.”

Here’s where Ward is a little different. He doesn’t much care who he fights, or if it’s for a title — or really if he ever fights for ….View full article