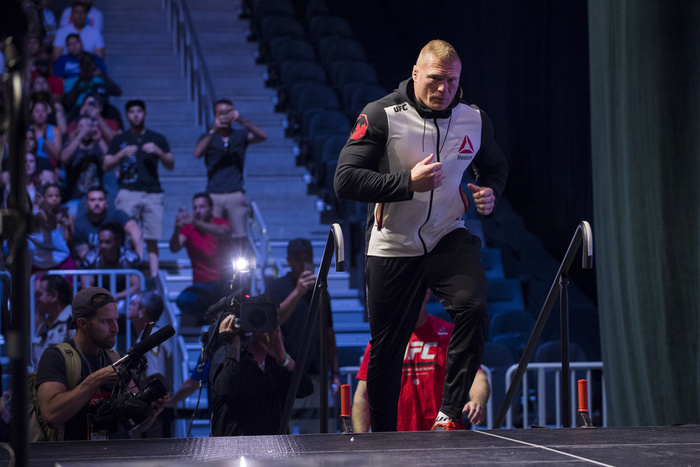 In a perfect counterpoint to all the promotional clamor that accompanied the run-up to UFC 200, and in particular the main event resurrection of Jon Jones and the return of amateur wrestler-turned-pro-wrestler-turned-mixed-martial-artist-turned-pro-wrestler-turned-mixed-martial-artist Brock Lesnar, both fighters were very quietly removed yesterday from the official rankings on the UFC’s web site, a subtle, blink-and-you’d-miss-it message from the promotion that following Jones’ and Lesnar’s disastrous positive tests for banned substances (Jones before he fought, Lesnar right afterward) it will be a long, long time before we see either of the two disgraced superstars in the Octagon again, if we ever do. The fact that the UFC made such a move with less fanfare than they would usually make while announcing the inclusion of some preliminary fight on some incidental UFC on Fox card six months from now just goes to show how devastating those test results could be to the promotion’s push toward mainstream legitimacy and how desperate they are to change the narrative. Like a government official dropping bad news on a Friday afternoon, the UFC is burying the lede.

And it’s hard to argue with them. The UFC gains nothing by making a fuss about erasing their two most famous cheaters from their site, like Stalin wiping Trotsky out of photographs of the Russian Revolution. Jones has been the promotion’s most reliable disappointment for years, the golden-child gone repeatedly off the rails, a fighting genius with the self-preservation skills of a child, and, as arguably the best fighter the sport has ever known, living proof to MMA haters that cage-fighting mastery goes hand and hand with misbehavior and social deviance: the exact message the UFC has spent the last 15 years killing itself to counteract. Every time Jones got arrested for some driving ….View full article