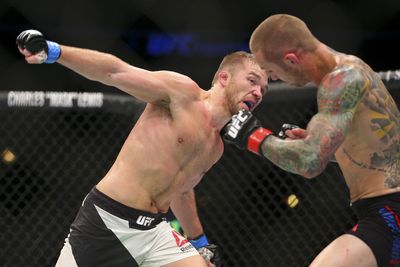 “Kid Lightning” has family matters and a rib injury to tend to.

No. 7-ranked Bantamweight Bryan Caraway has been saddled with a reputation of ducking fights of late — he’s seen several potential opponents call him out in recent months.

Now, “Kid Lightning” — who was most recently awarded a unanimous decision victory for his three-round romp over Eddie Wineland at UFC on FOX 16 last July — explains his side of the story to MMAjunkie Radio.

“I turned down one fight and that was with [Urijah] Faber. I couldn’t do that fight. I couldn’t do that date. They [the UFC] wanted to know really, really far out — that was basically five days; a week after I fought [Eddie] Wineland. I wanted to decompress and hangout. They wanted to know right then because they were doing this big press tour and were trying to get all main even fights lined up for the next six to eight months. They ….View original article