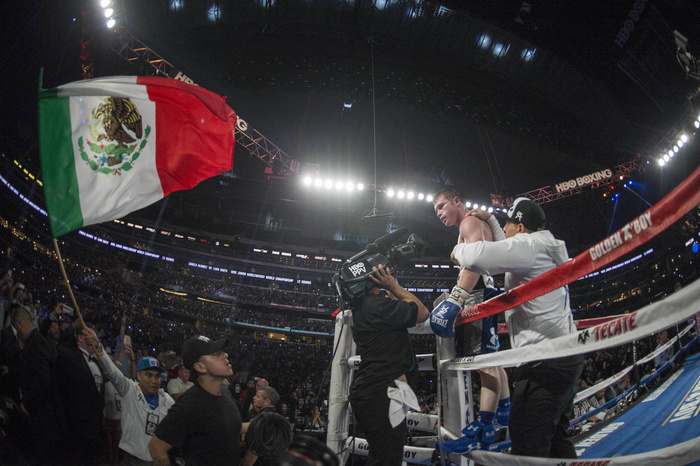 Late last week, Saul “Canelo” Álvarez announced that he will be fighting Julio Cesar Chavez Jr. on May 6th at a location to be determined on HBO PPV. The Mexican boxing sensation dropped the news via Twitter:

“It’s official. My next fight will be vs. Chavez Jr. on May 6th. This is how I operate. Proving myself in the ring and shutting him up,” Álvarez tweeted.

Apparently, there has been somewhat of a rivalry between the two. Chavez fired shots regarding some of the choices the former middleweight champ made during his WBC reign, specifically his fight against Amir Khan, which was held at a complete two-division jump for Khan.

“With all due respect, Canelo’s fight is an embarrassment to the middleweight division,” Chavez told Boxingscene.com back in February of last year. “A 140 fighter fighting at that weight [of 155]. It dishonors boxing.”

From there, a heated back-and-forth transpired between the two, and landed us to where we are today. No love has been lost from Canelo’s side either.

Chavez Jr. was selected from a short-list of contenders that included himself, WBO champ Billy Joe Saunders, and of course the sport’s “most feared fighter” Gennady Golovkin. Well, to be fair, that last name was really more on the fans’ list than Canelo’s.

That is perhaps the most glaring issue with Chavez Jr. as Canelo’s upcoming opponent. The choice completely invalidates all the statements previously made by his camp as to why they were not facing Golovkin. Here are some examples:

“I’m not a middleweight. I’m a super welterweight. That’s my weight class. I wanted to fight this time for some sort of title at super welter,” Álvarez said right before his showdown against Amir Khan last year in May.

At that same press conference, Golden Boy president Eric Gomez gave further statements explaining why the weight limit was the main issue holding back the super-fight.

“There’s a big misconception, people keep calling Canelo a middleweight,” Gomez said. “Look at his record. The highest he ever fought was at 155. He can still make 154 comfortably and he said it all along: Whenever his body feels that he has to make the change and jump, that’s when he’ll do it. He’s not a middleweight.”

What most people found problematic with those statements is that at the time Canelo Álvarez was recognized as the lineal middleweight champion of the world, and would proudly claim the title when it suited him, yet drop it when it didn’t, i.e. anytime someone would ask why he had not yet fought Golovkin. It would seem only natural that the “champion” of a division allow contenders to weigh in at the full limit stipulated by the sport of boxing. They are, after all, supposedly the best fighter in a given weight class. Though to be fair to the Canelo camp, those statements were made more than 6 months ago, so perhaps now there has been sufficient time for Canelo to “comfortably” transition into the middleweight division (though this is also the former middleweight champion we’re talking about here), and according to Gomez, the fight against Chavez Jr. is actually in preparation for a showdown with Golovkin later in the year.

“It’s a bigger guy, he’s right-handed and not a guy who will box or run. I think it prepares [Alvarez] very well [for Golovkin],” Gomez said of Chavez at a teleconference. “It’s not a similar style to GGG because GGG is a better boxer, but Chavez is a bigger guy in front of him who will be throwing bombs.”

Gomez gave further explanation for the sudden weight jump by citing that the fight against Chavez Jr. is more about legacy, rather than mundane concerns like title belts and weight divisions.

Golden Boy CEO Oscar De La Hoya has also gone on record promising that bout with Golovkin will be made in 2017 should Álvarez emerge victorious against Chavez Jr., and Golovkin get past his bout against Danny Jacobs on March 18th.

I’ll agree that a matchup between Mexico’s two biggest stars is a big deal for the nation, and perhaps for boxing in general. It will most likely be a great fight. But should the showdown with Golovkin still fail to materialize even after both respective obstacles are cleared, it will be very obvious that Canelo Álvarez is ducking Gennady Golovkin, and this time there will be even more evidence to argue that case.

Shannon Briggs and Fres Oquendo to Fight for WBA Title

Trump, Tyson, and Don King Ringside at Mayweather-McGregor Is a Fever Dream Fit For 2017

The Boxing Matches We Hope to See in 2017