Home MMA News Chael Sonnen: ‘I would have stopped’ Tito Ortiz from being UFC champ if given chance
ShareTweet 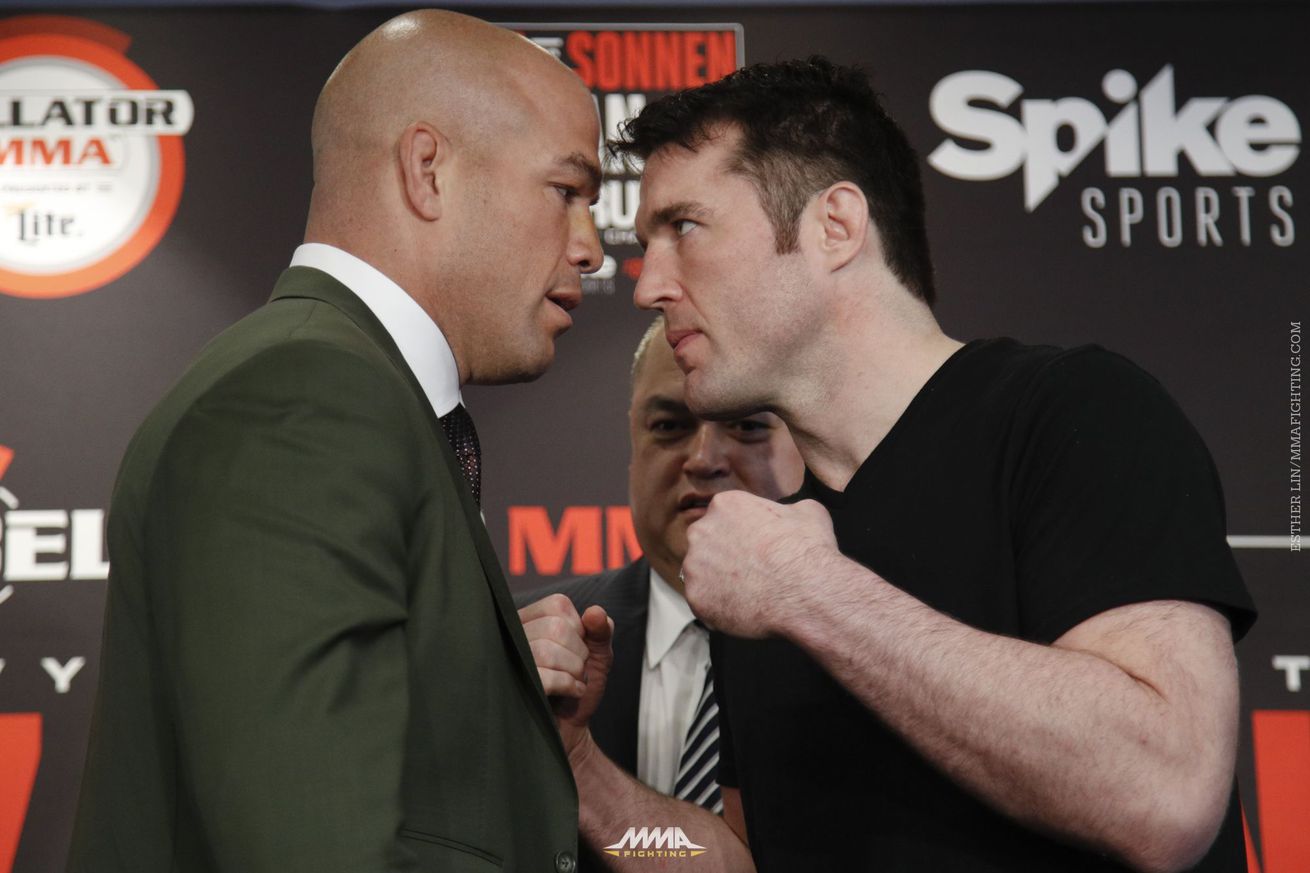 LOS ANGELES — All Chael Sonnen wanted was a chance. That, he believes, was the difference between a long run for Tito Ortiz as the UFC light heavyweight champion and Sonnen holding the belt.

Ortiz, now a UFC Hall of Famer, held the UFC’s 205-pound title for more than three years, from 2000 to 2003. At the time, it was the longest title stretch for anyone in the UFC’s premiere division, eclipsed only now by Jon Jones.

During that time, Sonnen was just out of college (where he was an All-American in wrestling at the University of Oregon) and getting his feet wet in MMA. While Ortiz was carrying around the UFC belt, Sonnen was competing for promotions called Dangerzone and XFA and Hitman Fighting.

“Meanwhile, I’m fighting down at the dog park waiting to get my opportunity,” Sonnen told MMA Fighting on Wednesday. “And that’s just the reality of a fighter. It’s very hard to break into this business. Tito knew Tank Abbott, Tito was at the right place at the right time, stepped right in and he did run with it. I don’t know that I would dispute that. But my claim has always been, had I been able to get in there, I would have beat him. I would have stopped them all.

“And that’s either a true statement or it’s not, but it’s taken me 20 years to get the opportunity to find out one way or another.”

Sonnen, 39, will get the chance to retroactively prove that theory when he meets Ortiz in the main event of Bellator 170 on Saturday night at The Forum in Inglewood, Calif. Sonnen can’t know for sure if he would have beaten Ortiz back in 2002 or 2003. What he does know is where he was at compared with another legend of that time: Randy Couture, who beat Ortiz for the UFC light heavyweight title 14 years ago.

“I knew exactly where I stood in the world,” Sonnen said. “I was in the practice room every single day with world champions — Pride world champions, UFC champions. You name it, I had it every single day. I knew everybody in the world that could whip my ass and there was one guy and his name was Randy Couture. And that’s the truth. And the guys that were around back then will tell you the same thing.”

Ortiz, 41, remained one of the UFC’s top stars over the next three years after Couture won the belt. His battles with Couture and Chuck Liddell well live on in the annals of mixed martial arts history. It was the first era where the sport was starting to flirt with the mainstream.

“Tito has been fighting a really long tie and fighting at a high level,” Sonnen said. “A lot of the guys he fought back then suck. That’s true. But at that time, they were the top guys. He was truly the best in the world doing it at that time. He didn’t duck anybody. He didn’t dodge anybody. I can remember him stepping up in really hard fights.”

Sonnen bounced around until 2005 when he got his first crack at the UFC. But a 1-2 run in the promotion sent him packing, back to the smaller shows. After two straight wins in WEC in 2008, by that time fighting mostly at middleweight, Sonnen was in the UFC yet again. He lost to Demian Maia in his return bout, but over the next year — and three wins — the clean-cut gentleman from West Linn, Ore., became “The American Gangster.”

Sonnen turned trash talk — or, as he calls it, truth talk — into an art form. His running down of Anderson Silva verbally was a turning point for Sonnen himself, and also for the UFC. For the first time perhaps in the history of the sport, someone was able to sell fights solely based on the ingenuity of their words, the hype they could create.

It didn’t hurt that Sonnen nearly beat Silva after earning the middleweight title shot in 2010. After winning four rounds, Sonnen got caught in a Silva triangle choke n the fifth and had to tap. He fell in the rematch in 2012, but by that time he was one of the best drawing fighters in the UFC. Sonnen also got a light heavyweight title shot against Jon Jones in 2013, coming off a loss to Silva. Few could put butts in the seats and move pay-per-views like Sonnen, the true pre-cursor to Conor McGregor.

Perhaps that Sonnen — “The Bad Guy” — would have shown up earlier had he been signed by the UFC and thrusted into title contention immediately in 2002 or so. Sonnen does indeed own a wrestling win over Ortiz in college.

“I don’t know what I could have done with him at that time,” Sonnen said. “Tito did a very good job and really helped the industry and the organization. My contention from the beginning of this is that I beat him when we were kids and I would have stopped him from being the UFC champion. I would have stopped him from being in the Hall of Fame. Those things don’t bring me pleasure. I’m glad Tito had good success.”

Ortiz did; so did Sonnen. After a significant amount of trash talk, the two will meet for the first time in a real MMA fight Saturday.

We’ll never know if Sonnen would have been the guy carrying the ball for the UFC back in the early aughts if he got the chance. This is the twilight of both their important careers, neither of which can be understated.

Sonnen joked Thursday at the press conference that Ortiz wasn’t even supposed to be here. He wanted Wanderlei Silva in this fight, but Silva is still suspended by the Nevada Athletic Commission (NAC), a place Sonnen knows all too well. The grudge match with Silva will have to be second in his self-described “legend’s ass-whooping tour.” History comes first.

“I told everyone I knew I could beat Tito,” Sonnen said. “It took me 20 years to get here and we’re all going to find out together Saturday.”