Home MMA News Cheese! Ronda Rousey thanks Jarrod Haschert for ‘being such a gentleman’ at Marine Corps Ball
ShareTweet 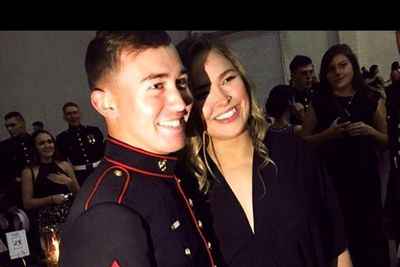 “Rowdy” fulfilled a promise to the star-struck marine and had herself a good time.

Look at those pearly whites!

Emotional — and still reeling from the effects of her loss “Down Under” one month ago — Rousey made the time to accompany Haschert and was all smiles last night (Fri., Dec. 11, 2015).

Thank you Lance Cpl. Jarrod Haschert for taking me to the Marine Corps Ball, being such a gentleman, and putting a smile on my face again

From the looks of it, the 28-year-old had herself a good time, which she could definitely use these days, judging by this photo uploaded to her Instagram page (via IBT Times) the morning after.

As far as the fight game goes, a rematch between “Preacher’s Daughter” and Rousey appears all but set in stone for UFC 200 on July 9, 2016, even though the former’s camp believes the Glendale Fight Club representative won’t be ready.

That’s based upon this health update from the ex-champion.

When we eventually see Rousey in the Octagon, will she be a reinvigorated beast or, perhaps, a wounded lioness?

Only time will tell.