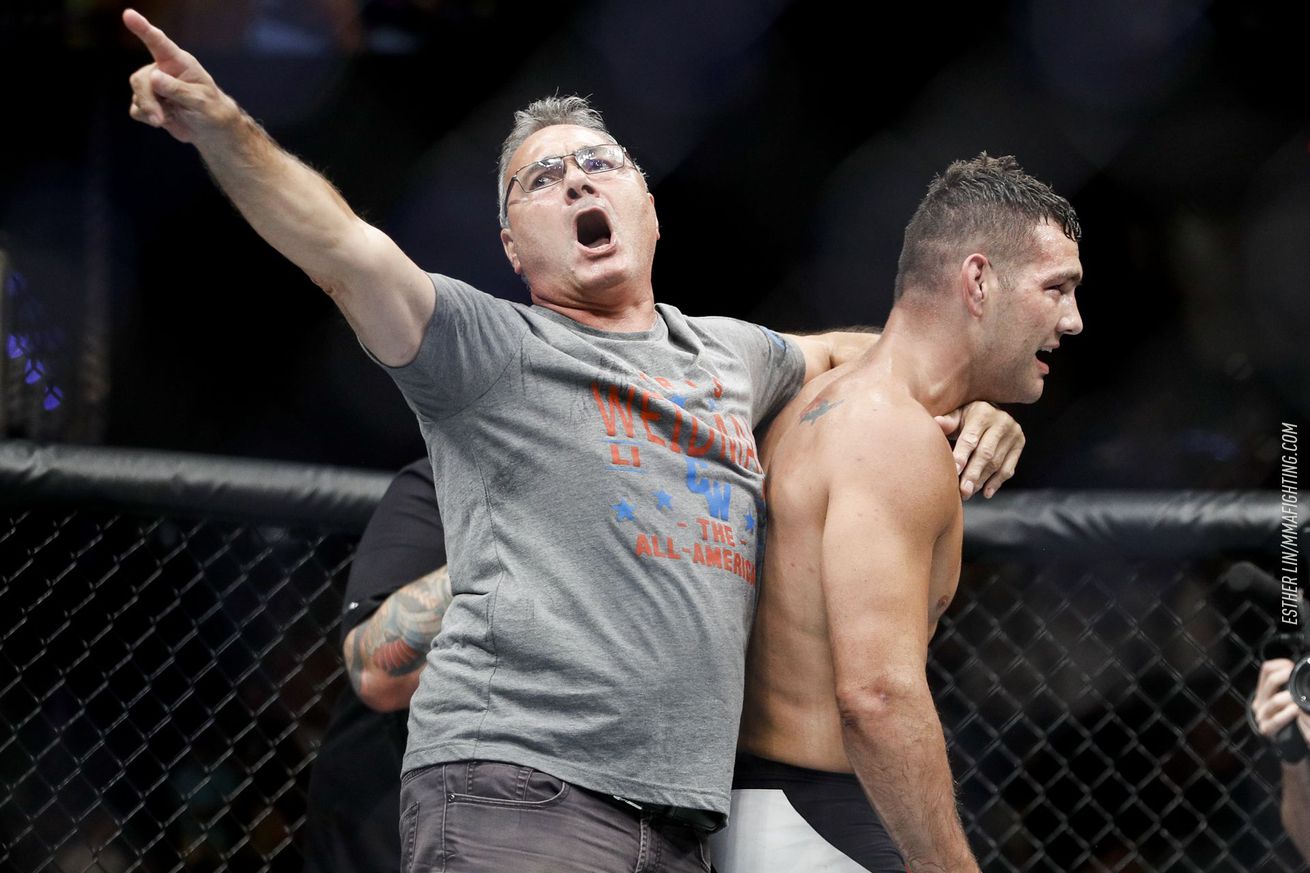 Chris Weidman may have won his fight against Kelvin Gastelum at UFC on FOX 25, but the war against UFC middleweight champion Michael Bisping raged on throughout the weekend.

The two traded shots on Twitter throughout Sunday in the aftermath of Weidman’s in-cage callout of Bisping at UFC on FOX 25. Things escalated quickly, with Weidman calling Bisping a “cross eyed b*tch” and Bisping ultimately turning towards Weidman’s father — who joyously celebrated Weidman’s win on the FOX broadcast — telling the New York native to “put your dad on a f*cking leash.” And that last jab, Weidman said, is where Bisping crossed the line.

“The gloves are off with him,” Weidman said Monday on The MMA Hour. “He ripped up a Cuban flag right in (Yoel) Romero’s face between rounds during the guy’s fight for a championship (at UFC 213), so the guy doesn’t care about anything. And then right away, I do the cross-eyed thing, he comes right at my father, he comes at my family. He can say anything he wants about me, he can talk about how ugly I am or anything about my face or my body or whatever, or my career. Come at me all you want. But this guy, then he comes after my father? So yeah, whatever, he’s an idiot.”

Your a fucking piece of shit. Mocking a fight injury. Well I pray you don’t suffer the same. And fuck you pussy. When I see you, it’s on.

@ChrisWeidmanUFC “Im the champion” u sounded so pathetic.Jealousy is one of the deadly sins.Shame on U. On your knees and pray harder bitch

@ChrisWeidmanUFC and lastly. Put your dad on a fucking leash. It’s embarrassing.

Weidman’s father is likely best known by MMA audiences for his speech after UFC 194, when he took the mic following Weidman’s title loss to Luke Rockhold and shouted that Weidman was “still my boy.” Although he avoided the mic at UFC on FOX 25, Weidman’s father was equally expressive after his son’s win over Gastelum, but Weidman said those actions don’t give Bisping the right to say what he did.

“He definitely embarrasses me, but you can’t change your family,” Weidman said. “My dad is over 60 now, you’ve got to love people for who they are. He’s my dad and obviously he loves me and is supporting me, he’s happy for me, so it’s hard to control his emotions while I’m in the middle of a lot stuff going on, so it is what it is. At the end of the day, it doesn’t give Michael Bisping the right to open up his mouth.”

When asked about his next move, Weidman indicated he may go to UFC 214 on Saturday just to spend some time with Bisping, who will be working the event as an analyst for FOX Sports.

“I might go to Anaheim just to find Mr. Bisping, who wants to bring up my family,” Weidman said. “I’m going to slap him in his mouth.”

As for his next fight, Weidman said that he “wouldn’t be surprised” if he ends up competing Nov. 4 at New York’s Madison Square Garden as part of UFC 217. And Weidman doubled down on the idea that Bisping is who he wants to fight most.

“I think the best guys in the world should fight,” Weidman said. “He hasn’t fought a No. 1 contender guy since he’s been the champion. Every single time I defended the belt, it was against the best guy in the world. Somehow he got away from doing that. It’s kind of messed up the division. Right now, the guy Robert Whittaker, he won the interim title but I think he’s going to be out for awhile. That being said, I’m the only guy coming off a ‘W,’ so I think it would make sense.

“If it makes sense, if Bisping isn’t too scared to actually fight a guy like me and give up his belt, then it’ll happen. But if not, we’ll fight other guys. We’ll see.”

If he is unable to fight Bisping next, Weidman said he was willing to do whatever it took to climb back into the title picture. His win over Gastelum snapped a three-fight losing streak — the only losses of Weidman’s career — and Weidman said his whole focus now is to reclaim the UFC middleweight belt that once was his.