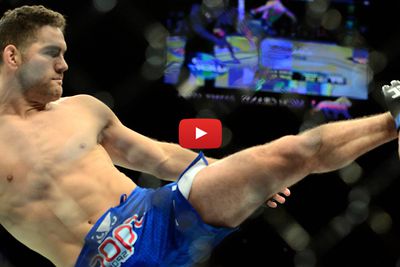 The winner gets one of these two men.

Weidman (13-0) returned from a lengthy injury layoff to beat the snot out of Brazilian banger Vitor Belfort in the UFC 187 main event earlier this year in “Sin City.” Rockhold (14-2), meanwhile, recently strangled Lyoto Machida on FOX to record his fourth-straight win.

MMAmania.com will deliver LIVE round-by-round, blow-by-blow coverage of the entire UFC 194 fight card on fight night (click here), starting with the Fight Pass “Prelims” matches online, which are scheduled to begin at 7 p.m. ET, and then the remaining undercard balance on FOX Sports 1 at 8 p.m. ET, before the PPV main card start time at 10 p.m. ET.

For much more on tonight’s UFC 194 extravaganza including previews, videos, full line up and more check out our comprehensive “Aldo vs. McGregor” fight guide right here.