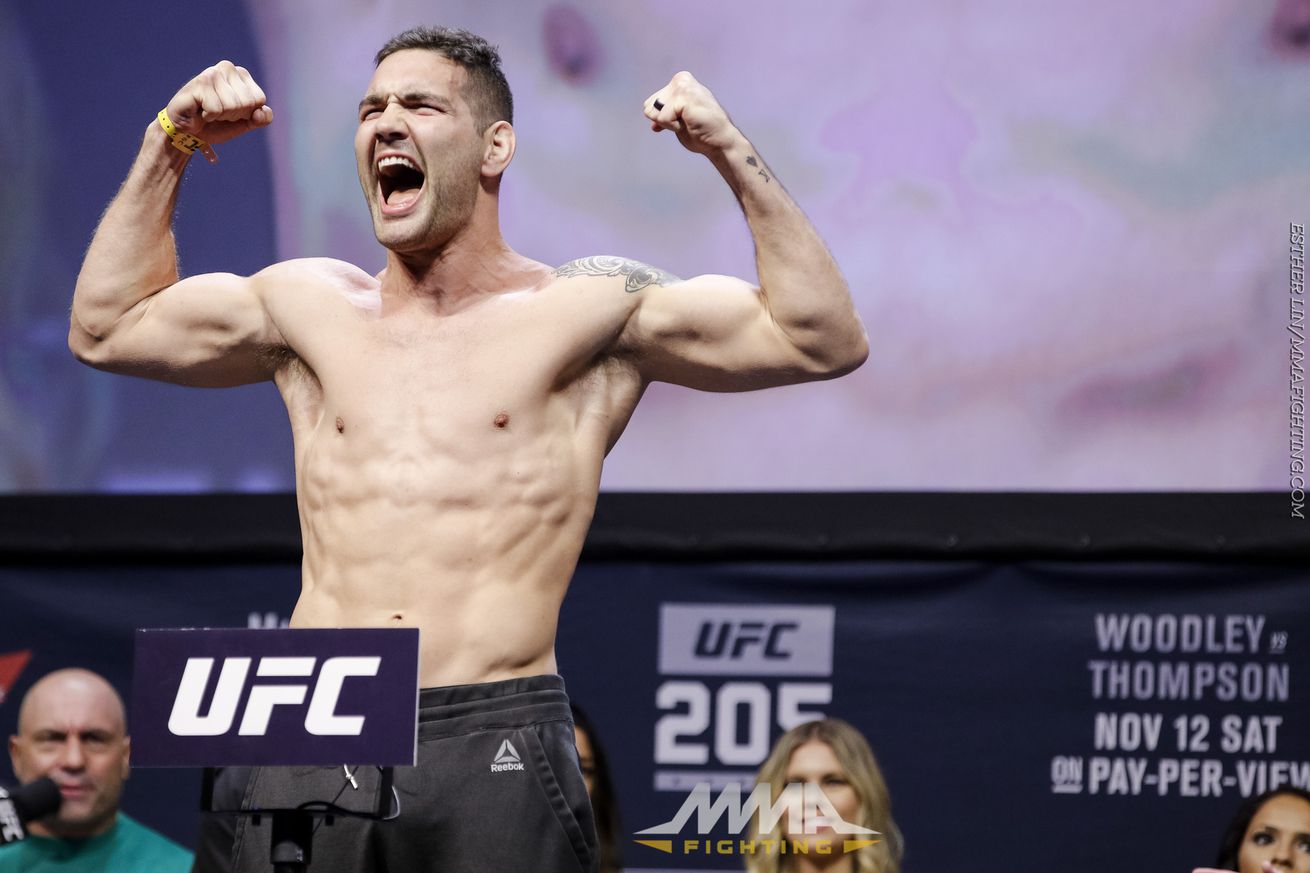 It’s been nearly two years since former middleweight champion Chris Weidman scored victory in the Octagon, a TKO in his middleweight title defense against Vitor Belfort at UFC 187. Those two years feel like an eternity to a guy who lost his title to Luke Rockhold in December 2015, watched his rematch with Rockhold fall apart two weeks before UFC 199 with an injury, then watched Michael Bisping seize the opportunity to win the title over Rockhold in his stead.

It didn’t help that Weidman, realizing a life-long dream of fighting in his native New York at Madison Square Garden in November, was knocked out viciously against Yoel Romero at UFC 205.

Now, as he gets set to fight Gegard Mousasi in the co-main event of UFC 210 in Buffalo this coming Saturday, Weidman has been quietly going about putting together the pieces during his training camp in Long Island. A fighter who’d gone undefeated for the bulk of his career finding himself in a position to put back-to-back losses behind him is tough, even for a psychology major from Hofstra.

Yet identifying a whiff of complacency is tougher still, and that’s what his coach Ray Longo says his camp has effectively done.

“If you think about it, there was only one way to go,” Longo said on Monday, during an appearance on The MMA Hour. “You can’t keep going up and up and up. So we plateaued a little bit before. I think that’s going to be the mantra. That’s behind us, and we really had to go back to what got us there and really just move forward.”

Longo said that circumstances beyond fighting — opportunities, family matters, spreading things too thin — didn’t help during Weidman’s recent tailspin, and that was something they addressed for this fight camp.

“I mean, life throws a lot of things at you,” he told Ariel Helwani. “You have family, you’ve got kids, you’ve got all this stuff happening outside and you know, all work and no play makes Jack a dull boy. So you want guys to entertain things that they could be successful in maybe after their career is over. But again, the mantra for this was really just exclude — just focus on what you have to do.

“That’s what I loved about this camp. Chris really wanted to go to Brazil with his friend [Gian] Villante, but he didn’t. He wanted to be in Wonderboy’s corner in Vegas, he didn’t. He really, this was a time to get selfish, and just concentrate on your training. And I think the kid went beyond where we’ve been in a while, and I think it shows. If you talk to him I think you’ll see a different guy talking, and obviously if you look at him, the hard work just pays off. To the point that people are accusing him of being on PEDs, which I’m proud to say he’s clean as hell.”

Longo said that Weidman sustaining his dominance over a large period of time was a lot to ask, because, “nothing in life works that way, and I think we’ve learned to accept that and move on.”

Still, it’s rare to hear a coach use the word “plateau” in reference to a fighter of Weidman’s caliber, as it is a fairly unapologetic way of dealing in brass tacks. Longo, who has never been shy about saying what’s on his mind, says it was necessary to identify everything that has gone wrong in the last two fights, whether it’s big picture of small picture stuff.

“Look, it’s always exciting working your way up to the top, and it’s really hard to hold that,” he said. “Who knows, I mean I think maybe we all got scattered a little bit. But we’re all back. We’re back. I really put a lot into this camp myself as a coach, and I got a lot of help from a lot of other people, which I appreciate. I’m really psyched for this fight.”

The bitterness of coming away from the UFC’s inaugural show at Madison Square Garden — which had been a dream scenario for most of New York’s Serra-Longo fighters — empty-handed was a tough pill to swallow for not only Weidman, but for Longo too.

He says that losing is never easy, regardless of the geography.

“Look, honestly, I really like to win,” he said. “I hold it together good but I think I’m a sore loser — not a sore loser, but I really don’t like to lose. I think the experience was great, and I’m happy to see MMA in New York, but I mean nothing would have made me more happy than a win. And it didn’t go our way.

“But again, that’s life man. You’ve got to pick yourself and move on, or else you’re never going to go nowhere in this life.”

As for if he could have envisioned Weidman going winless over a two-year span, especially after winning his first 13 bouts in dominant fashion, Longo said it would have been asking a lot to believe that.

“No, I would have never have thought we’d be in this position, but we are and we’re ready to tackle it and really write his comeback story, man.”