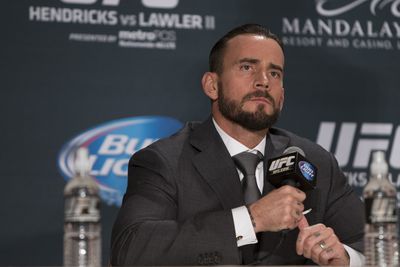 CM Punk was sparring in August at Roufusport. Things ended up on the ground and, in a scramble, he posted off his elbow with much of his body weight. His shoulder could not support the force and it popped.

At that moment, Punk thought for sure it was an injury that would need surgery.

“It was one of those pops where everybody in the room just turns and looks,” Punk told Ariel Helwani on Monday’s edition of The MMA Hour.

The former WWE star finished the round anyway and the session, too. Afterward, he mopped the floors as he normally would with the thought that the injury was going to set him back a great deal.

As in turns out, Punk said he “dodged a bullet.” An MRI showed there was no tear of his labrum or rotator cuff. The Chicago native is hoping to do some bag work as early as this week and ease himself back into full-time training soon.

“I’d be fine if I could train, if I could do something,” Punk said. “But just kind of sitting around waiting for the MRI that week was pretty miserable. Riding the bike hurt. Jumping rope hurt. But it’s a lot better now.”