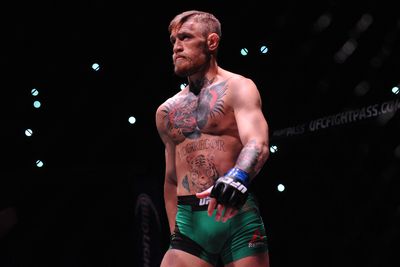 As Conor McGregor stated prior to his 13-second knockout win over Jose Aldo at UFC 194 in Las Vegas, Nevada, he now has myriad of options for his next step in his mixed martial arts (MMA) career.

On one hand, “Notorious” is very much interested in moving up to lightweight to vie for that title against the winner of this weekend’s (Sat. Dec. 19, 2015) championship fight between Rafael dos Anjos and Donald Cerrone in Orlando, Florida at UFC on FOX 17.

Or, he could simply stay put at featherweight and take on Frankie Edgar, who solidified his spot as No. 1 contender after knocking out Chad Mendes at The Ultimate Fighter (TUF) 22 Finale (see it).

As his coach Jon Kavanagh revealed on The MMA Hour, Conor is going to do both. The order in which he does it, however, likely won’t sit too well with “The Answer,” as John says that fight likely won’t happen until UFC 200 in July of 2016.

Which means “Notorious” wants to fight for the 155-pound belt in as little as three months.

“There will always be another guy, that’s the sport. A tip of the hat to Frankie, I didn’t think it would go that way. It was a fantastic job, beautiful left hook that dropped him clean. And I have no doubt that fight will happen, but I do think the next one will be lightweight for the belt. Maybe in March or April, there’s a possibility of a big New York card. So, maybe that and then July at UFC 200 maybe defend the featherweight belt against Frankie. Everybody’s time will come, everybody will get their shot at him. People have to a be a bit more patient, but it will come.”

The plan is very much a possibility, ….View full article