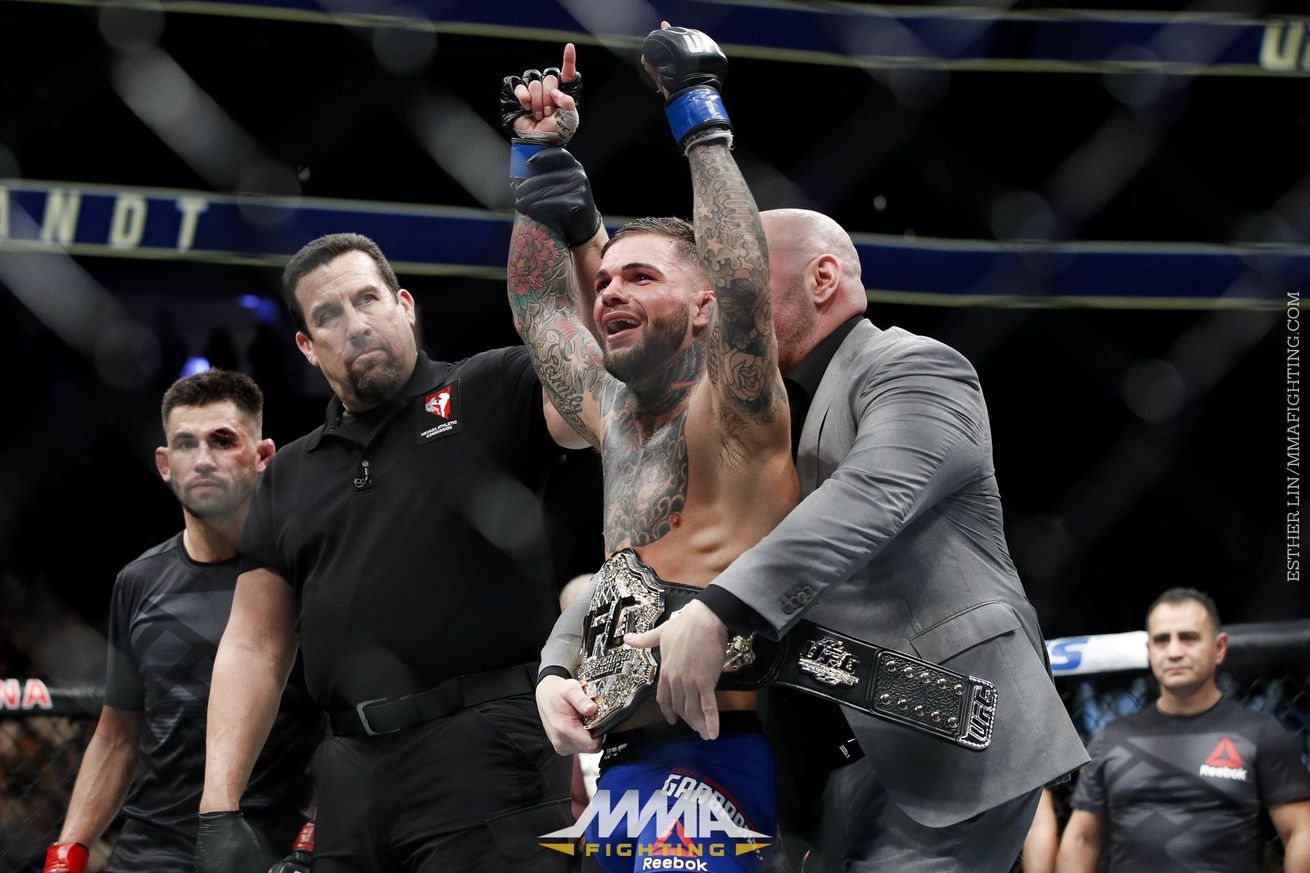 As soon as T.J. Dillashaw (15-3) scored a one-sided win over John Lineker (29-8), and then talked about how if he didn’t get the next title shot, he’d know it was rigged, the feeling was he was locked in as next in line for the winner of the Dominick Cruz vs. Cody Garbrandt title fight.

Either way, the fight had a story. Dillashaw and Cruz would be a rematch of one of 2016’s best fights, where Cruz captured the title for a second time winning a close decision. Garbrandt vs. Dillashaw was a battle of former teammates at Team Alpha Male, two people who had trained together in the past and each had captured the world championship. But there was bad blood between them, especially from Garbrandt’s end, over the way Dillashaw left the team.

While Dana White talked of Dillashaw as the next title contender, Garbrandt (11-0), after winning the title, thought that maybe Cruz should get a rematch first.

“You know what, I had so much fun in there, Dom’s been arguably the best bantamweght in the world, let’s run that s*** back again,” said Garbrandt. “Let’s give him an immediate rematch and he can go on to the next chapter of his career. I’d like to give Dominick Cruz a rematch. Ultimately, it’s up to the UFC, but I’m the champion. I’m the baddeset dude in the division, so ultimately, I call the shots.”

Team Alpha Male means a lot to the Ohio-born Garbrandt, who grew up doing both boxing and wrestling. When they were both kids, Garbrandt competed with Logan Steiber, an NCAA champion who recently captured a world title in wrestling. Steiber tweeted earlier in the day that he and his friend would both be world champions in the same year.

Garbrandt only had one pro fight when he made the move to Sacramento, Calif, to train at Team Alpha Male.

“Urijah (Faber) was a huge part of me being a world champion,” said Garbrandt. “He believed in me the way I believed in myself. It gave me more motivation and more determination to make it.”

After Garbrandt had captured a UFC title, the one thing that eluded Faber in his Hall of Fame career, the two embraced after the decision was made.

“He made me cry,” said Garbrandt. “We cried together. It was happy tears. We shared that moment. It’s been great to be part of the team. I remember coming out there, 1-0, a year off from injuries, from brain trauma, and I said, `I’m not losing any more time in my life and my passion. I’m going to challenge myself against the best team in the world.’ I showed up in Sacramento. Urijah and Team Alpha Male put me through the gauntlet. I remember Urijah asked me what I wanted to do. I said I wanted to fight in the UFC. He said, `Get to 5-0 and I’ll get you there.’ Now I’m 11-0 and world champion.”