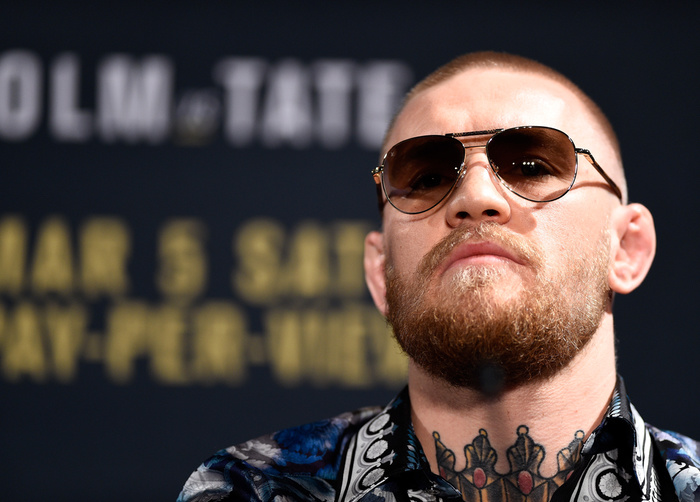 Last month the Dublin tabloid newspaper Sunday World celebrated local hero Conor McGregor’s UFC 194 win over Jose Aldo by showing the world where the new featherweight champion would be laying his head upon his triumphant Christmastime return to Dublin. To highlight the rags-to-riches spirit of McGregor’s rapid rise to fame (from dreamer on the dole to world champion in three short years), the World published a photo of McGregor’s brand-new sprawling estate, called Ladycastle, located on the grounds of the K Club golfing complex in County Kildare, and four of McGregor’s new luxury cars, part of a fleet that at that time was up to eight. “The Notorious had been staying with his parents in their home in the Laraghcon estate in Lucan up until recently during his trips to Ireland,” the article stated. “But now the ex-plumber has moved into a new home with his stunning girlfriend Dee Devlin in one of Ireland’s most exclusive private estates.”

All in all, a pretty tame bit of celebrity snooping and luxury-porn from Ireland’s first-ever tabloid paper, an innocuous puff-piece seemingly custom-made to push forward the larger-than-life McGregor narrative McGregor himself had spent the previous three years promoting.

But for some reason, this particular story rubbed McGregor and his girlfriend, Dee Devlin, the wrong way, so last week lawyers for the couple filed a breach of privacy action against the Sunday World on McGregor’s behalf in the High Court, seeking undisclosed damages. In addition the lawyers filed an injunction against the paper on behalf of Devlin, presumably to compel the paper to take the article and the photo down from the Internet, which would mean Conor McGregor, for all his media savvy, has no idea how the Internet works.

It’s hard to know if McGregor and Devlin have a ….View full article