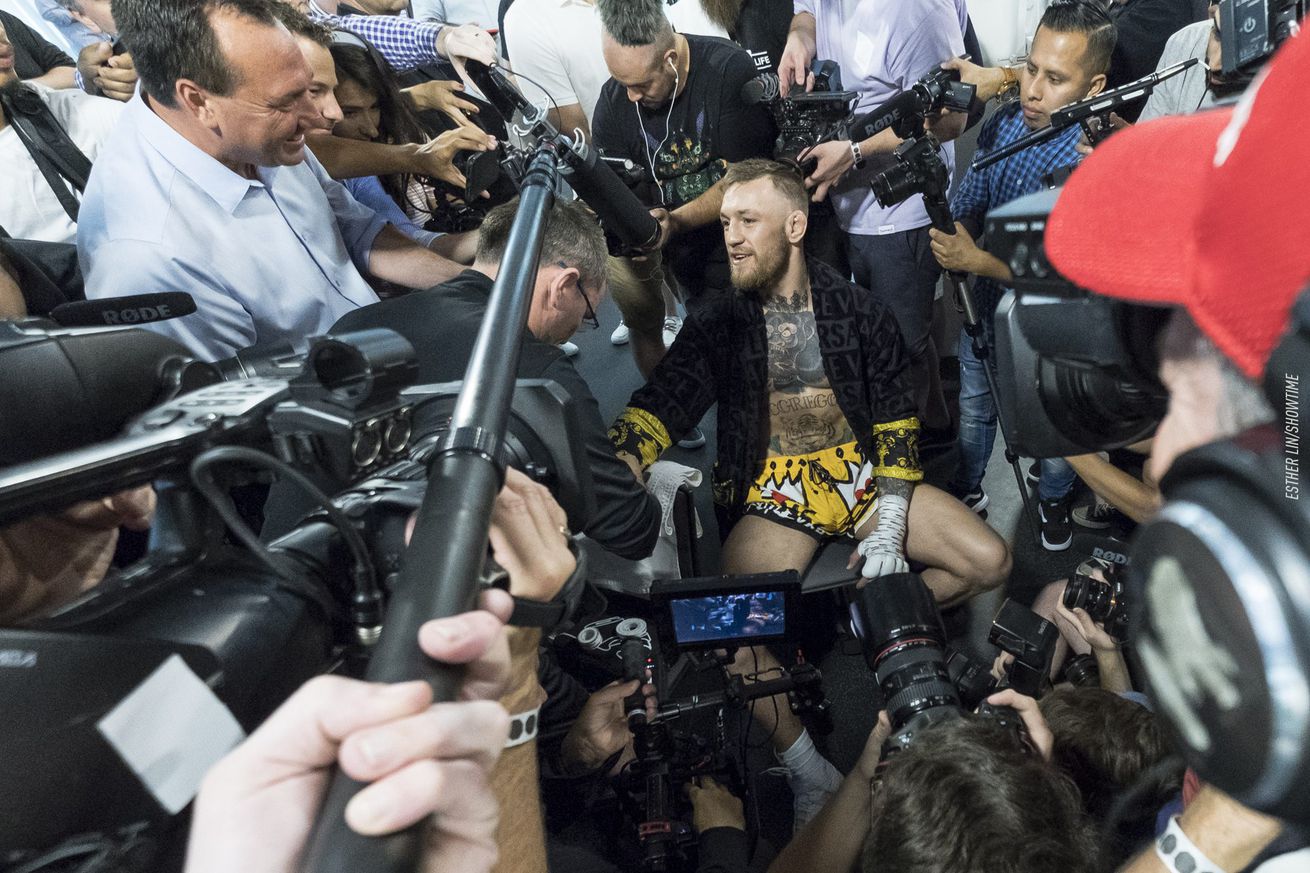 LAS VEGAS — Paulie Malignaggi has done dozens of interviews about what he perceived to be disrespectful treatment from Conor McGregor and his team when Malignaggi was in McGregor’s camp as a sparring partner.

On Friday, McGregor finally responded to the deluge of remarks at his media workout day ahead of the Aug. 26 fight with Floyd Mayweather.

McGregor, the UFC champion, said Malignaggi couldn’t handle the hard sparring and used the opportunity to take his leave in a cloud of controversy.

“It shows his character in my opinion,” Malignaggi said. “He was looking for an exit. The spars were not good for him. He took a lot of head trauma. Straight after it, we were worried. The sparring partners were actually telling us that when he was dropped back to the home he was stumbling out of the car after the 12-rounder.

“We thought the worst was happening. He was certainly badly concussed. And then he just got out of there and started running.”

That running McGregor was referring to was metaphorical. Malignaggi announced last week that he would be leaving McGregor’s camp, upset that McGregor’s team leaked photos of their sparring sessions to make McGregor look good and Malignaggi look bad.

McGregor, 29, wanted to set the straight Friday, saying it was not him who put the photo of Malignaggi appearing to get knocked down during their second sparring session on social media. Malignaggi said that he didn’t get knocked down, that it was actually a push down.

“I don’t know how it got leaked,” McGregor said. “When I found out, I pulled it back. Obviously, the internet is the internet. It blew up and then he had such an ego about it and so much pride and he went running.”

The footage, which Malignaggi has asked McGregor to release, was sent to Showtime, but McGregor said they’re “refusing” to release it. Malignaggi is working the Showtime broadcast for the Mayweather vs. McGregor fight.

McGregor said the only photo he posted himself of their sparring was the photo of McGregor holding both hands behind his back. He did that because Malignaggi talked trash about McGregor boxing last year, saying he could beat him with a hand tied behind his back.

“So I released one picture with me whooping his ass with both hands behind my back,” McGregor said.

“The Notorious” said he didn’t pay much mind to the things Malignaggi was saying, including telling Ariel Helwani on Monday’s edition of The MMA Hour that McGregor’s team put him up in what resembled a “crack house.” McGregor said there are multiple houses his team is staying in and he doesn’t know what Malignaggi was talking about.

“When I heard the stuff he was saying, I was like, ‘That’s concussion talk,’” McGregor said. “The man was badly, badly concussed. Look at his face. He was busted up bad.”

McGregor was also criticized by another boxer, Chris van Heerden, last year for leaking footage of their sparring session to make McGregor look good. McGregor said van Heerden spoke about their sparring first and footage got released only after that.

McGregor said he has kept his camp close to the vest, mainly with trainers, coaches and others who have been around him for a long time. Malignaggi was an outsider, there for sparring in many ways because of his previous trash talk. McGregor said he respected him for coming.

“He showed up, he tried his best, it didn’t go his way, he got his ass whooped, he got his pride dented,” McGregor said. “And then he wanted a way out. What better way for a guy like him to exit under a load of questions and mysterious?”

In the end, McGregor said there are no hard feelings, though.

“He was flattened,” McGregor said. “What can I say? He got his ass whooped. But I like the guy. He’s alright, though. He’s kind of a like a lovable mouthpiece. He’s alright, but it did not go well for him.”