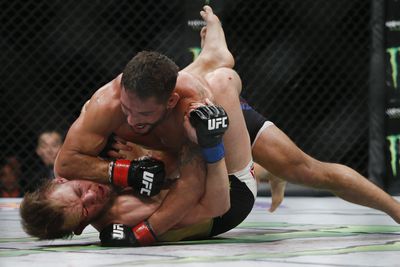 On Wednesday’s UFC 194 conference call with the four fighters comprising the main and co-main events, Conor McGregor got in a few barbs on his competition. And it wasn’t just Jose Aldo that the Irishman was after.

He couldn’t resist taking a free shot at Chad Mendes, whom McGregor beat at UFC 189 after Aldo dropped out with a rib injury.

McGregor, who was cageside at UFC 179 in October of last year when Aldo last defended the featherweight belt against Mendes, was asked if seeing the fight up close in Rio gave him anything to take away from it.

“I tell you what, I look at that fight ringside and thought to myself, wow, this Chad Mendes guy, he hits like an animal,” McGregor said. “He’s a dangerous, dangerous man. Then I went in there [against him] myself and realized he hits like a bitch.

“And if anything it showed me that these people aren’t on my level.”

McGregor is set to clash with Aldo at UFC 194 on Dec. 12, in what will be one of the biggest events of 2015. Mendes will be fighting Frankie Edgar in the main event of The Ultimate ….View original article