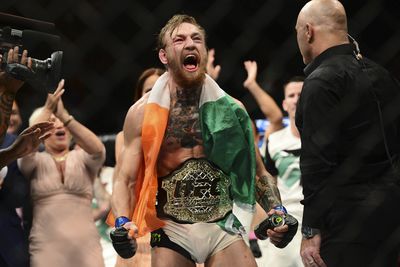 MMAmania.com takes you through Conor McGregor’s meteoric rise through the Featherweight ranks in the lead-up to his highly aniticipated title fight against UFC Featherweight Champion Jose Aldo.

The most stacked MMA event of the year showcases two highly anticipated title fights, a handful of potential No. 1 contender bouts, fan-favorites, and some of the sport’s most exciting prospects.

While many hardcore fight fans will tune in to witness the Middleweight title affair pitting Chris Weidman against Luke Rockhold in the co-main event, the attention of the masses will undoubtedly be placed upon Conor McGregor as he finally battles his bitter rival Jose Aldo to unite the UFC Featherweight championship in the main event of the evening.

Before McGregor’s incredible rise to prominence in UFC, the loud-mouthed Irishman began honing his craft back in 2008 with Straight Blast Gym and head coach John Kavanagh.

It didn’t take long before “Notorious” was making bold claims, as a 2008 interview shows a young McGregor promising he would indeed be UFC champion one day.

A former plumber’s assistant, McGregor came from modest beginnings, but knew MMA could be his path to fame and fortune for he and his family.

At 19-years old, the Dublin, Ireland, native made his MMA debut, knocking out Gary Morris in the second round of a regional show in Ireland. McGregor didn’t exactly storm out of the gates, however, as he stumbled to a 4-2 start to his professional career, including a loss to future UFC contender Joe Duffy in 2010.