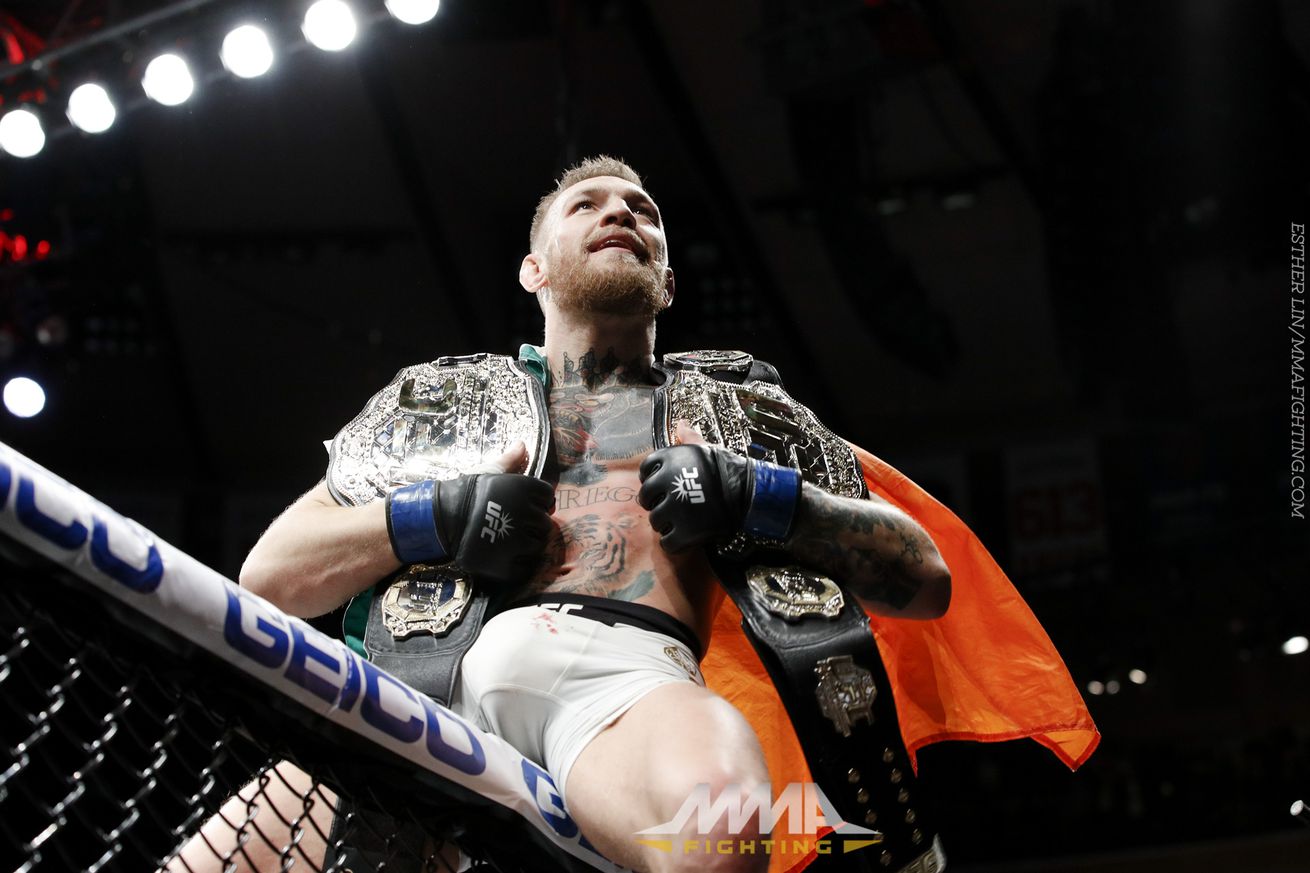 The brash Irishman intimated in an interview with Ireland’s RTE posted Friday that no one from the UFC asked him if he would give up the featherweight title before UFC 206 last week.

Prior to that event, the UFC announced that the main event between Max Holloway and Anthony Pettis, eventually won by Holloway, would be for the UFC interim featherweight title. McGregor, the UFC said, was relinquishing the undisputed featherweight belt, to Jose Aldo, who was the interim champ after beating Frankie Edgar at UFC 200 in July.

In McGregor’s estimation, he is still the UFC featherweight titleholder. He corrected the interviewer who referred to him as solely the UFC lightweight champion.

Conor McGregor talks to Clare McNamara after a year which he call the ‘culmination of his life’s work’. https://t.co/0AY8QPqGyu

After that victory, McGregor said he would be having his first child in the first half of next year and would be taking some time off. Since learning the baby is due in May, not March as he originally thought, McGregor said he might not be taking much of a layoff after all. He said he isn’t sure why UFC president Dana White has been saying he’ll be out for 10 months.

What McGregor wants is the UFC, and more specifically new parent company WME-IMG, to offer him an equity share of the promotion. “The Notorious” said he doesn’t want to come back until that discussion happens.

“I just don’t know,” McGregor said. “I’m weighing up my options. But again, I expect that conversation. I expect them to fly that jet to me. Ari, Patrick, the new owners from WME-IMG, the guys that bought the UFC for $4 billion, I want to speak to them. I want to see what their plan is. Because right now I don’t know what nobody’s plan is.”

Either way, McGregor is not recognizing Aldo, a man he beat in 13 seconds, as the featherweight champion. He believes he is still the rightful titleholder.

“I’m still the two-weight world champion,” McGregor said. “Make no mistake about that. They can say what they want, they can try and get phony belts and hand them out to people I’ve already destroyed. I mean, the current champion is a guy I KO’d in 13 seconds. The current interim champion is a guy I destroyed as well. … Officially, I don’t care what nobody says. I am the two-weight world champion and that is that.”