Home MMA News Conor McGregor warns Floyd Mayweather at final press conference: ‘You should have left me where I was’
ShareTweet 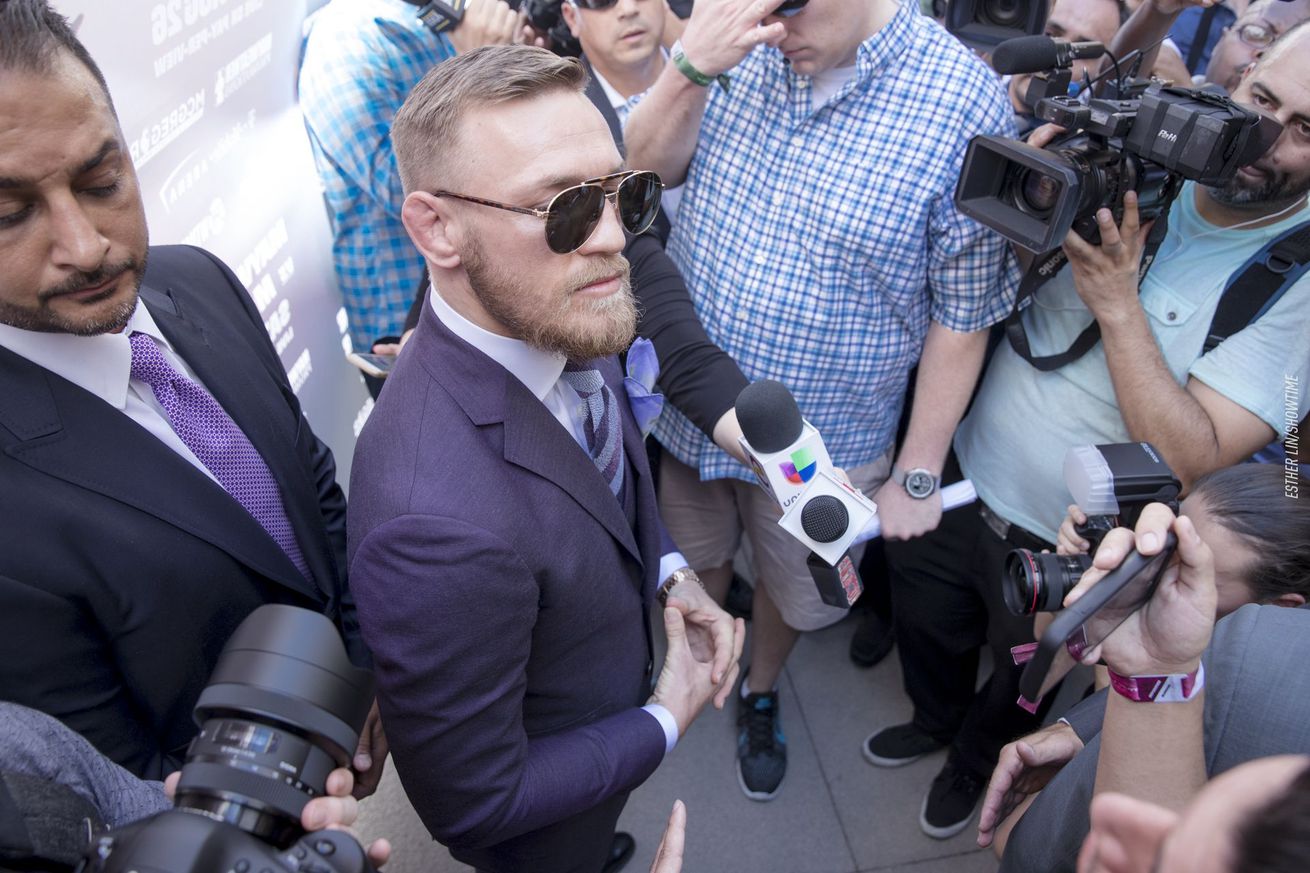 By and large, Wednesday’s press conference in Las Vegas hyping the Aug. 26 matchup between Floyd Mayweather Jr. and Conor McGregor lacked the over-the-top hype and histrionics which have marked nearly every step towards the mega-fight at T-Mobile Arena.

With the hours winding down until the 12-round, 154-pound boxing match, Mayweather and McGregor were mostly understated, as both men seemed run down, particularly Mayweather, whose voice cracked on several occasions while he spoke.

But that doesn’t mean the press conference was without its controversial moments. McGregor, the only fighter ever to simultaneously hold two UFC weight class titles, doubled down on the notion he’s going to finish Mayweather.

McGregor, for his part, also intimated Mayweather made a mistake by successfully petitioning the Nevada Athletic Commission to allow the fighters to wear eight-ounces gloves, instead of the 10-ouncers usually mandated for 154-pound bouts.

“Eight-ounce gloves, he made a big, big error in my opinion,” McGregor said. “I don’t see him lasting two rounds. I feel I have the decision to end it inside one.

“He messed up with those eight-ounce gloves. It was amusing and all that, but I’m very, very happy for eight. We usually fight in four, we’re going to fight in eight. Keep your hands up, keep your hands down, I don’t care. I’m going to break through whatever is in front of me.”

Mayweather, for his part, knows he’s the overwhelming favorite — even if it’s not reflected as such in the sports books — as a 49-0 fighter taking on someone who has never competed under boxing rules. So in the days winding down to the event, he’s doing his best to play up his opponent’s chances.

“To be in a combat sport, no matter if it is MMA or boxing, we’re fighters at the end of the day,” Mayweather said. “To be in a sport 21 years, I had to take it extremely serious. And for you guys to think that Saturday, I’m not taking this serious, I’m taking this extremely serious. But the thing is this, when all is said and done, I know one thing that I can do: I can fight. I can give it and I can take it. But for me to be 49-0 it’s obvious I’m not receiving, I’m giving.

But Mayweather also knows at the end of the day that McGregor is the one who has to fight under his rules. And “Money” is the one with decades of experience in this game.

McGregor for his part, intimated that what he’s experienced in the MMA world is tougher than anything a boxer can dish out.

“Have you ever had a shin bone bounce off your cheek bone?” McGregor asked. “You ever come through that? You know what I mean? That’s the game I come from. So, they can say what they want, I’ve come through a lot tougher than any of these have come through. We are prepared.”

McGregor also took a jab at what he said was Mayweather’s gambling issues when McGregor was asked if he would bet on himself to win the fight.

“I certianly know I’m going to win,” McGregor said. “I certainly know that. He’s got a gambling problem from what I can tell. He gambles on halftimes and things like that. He shows what his wins are, he never shows what his losses are. That’s why he’s in this position and he has to take this fight. I’m focused on the fight, not gambling.”