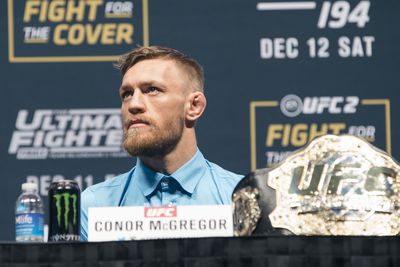 Oh, it’s not that things aren’t festive. Business was booming at the Strip’s largest hotel with the New Year’s Eve crowd in town.

But as what’s shaping up to be a fantastic welterweight title main event between Robbie Lawler and Carlos Condit at UFC 195 gets set to take over the MGM Grand Garden Arena on Saturday night, the memories of one of the wildest fight nights the venue had ever held still hung in the Las Vegas air.

Conor McGregor’s featherweight title victory over Jose Aldo on Dec. 12 at UFC 194 was a paradigm-shifting moment in mixed martial arts, the sort of watershed event which will be discussed for years and decades.

The mayhem generated stands in stark contrast to UFC 195’s main players. Lawler and Condit can generate excitement, too. Just not in the way McGregor can. They build their excitement in the cage, not on the mic. Given the participants, their fight, the first major main event of 2016, could very well end up being revisited when 2016’s Fight of the Year candidates are discussed.

Condit, for his part, seems incapable of McGregor-style trash talk. But he notes McGregor has earned his respect through his performances in the Octagon.

“He’s brought a lot of attention,” said Condit, the former UFC interim and WEC welterweight titleholder. “He’s a great promoter, great salesman, but he also backs it up as a fighter, so, it’s been pretty impressive and great for the sport.”

Lawler, for his part, took one of the longest roads to the top a UFC fighter has ever undertaken. He washed out of the UFC early and went nine years between UFC wins before he went on the run which brought him ….View full article