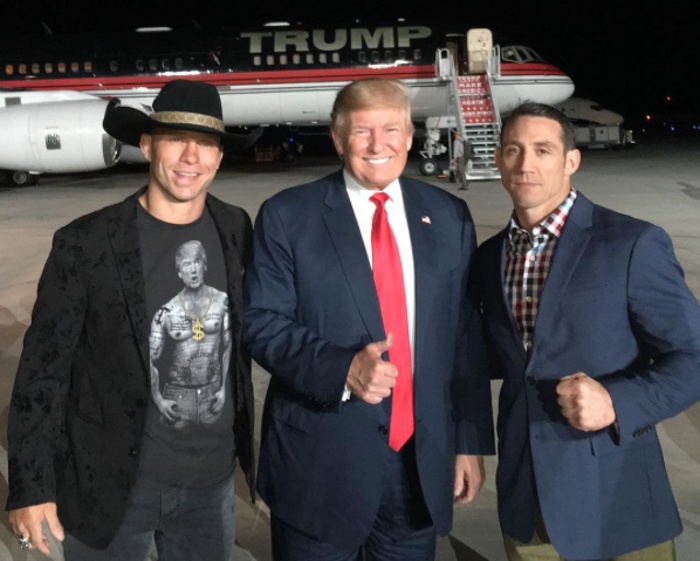 Our strange political season got a little stranger this week when Donald Cerrone, the UFC contender known mainly for his willingness to take fights on a moment’s notice and for his equally reckless love of jet skis, automatic weapons, and canned beer, shrugged off expectations and waxed political at a press conference during the run-up to UFC 205 in New York. And “Cowboy” actually showed himself to be a man of complex political philosophy, a soul filled with ideological contradictions, living proof that straight-ticket consistency can’t always satisfy the diverse desires of the human heart.

“[Trump’s] not just a racist bigot, like a lot of people think, like, ‘Oh, he wants to build a wall and scam the Mexicans out of here,’” Cerrone told reporters. “No, he doesn’t. Just listen. I understand that’s what your aunt’s telling you when she’s drinking wine on Saturday night but that’s not really what’s happening. And when we have two options, do we go with the indicted girl who’s full of shit or do we go with the wild, Conor McGregor Trump? Fuck, who knows?”

Of course, Donald Trump has made building a wall between the United States and Mexico one of the cornerstones of his campaign and Hillary Clinton hasn’t been indicted for anything, but there’s no need to get lost in the details, is there?

Besides, Cerrone is a man of contradictions—like Walt Whitman before him, a man containing multitudes. What other Trump fan, for example, would be ….View full article