Home MMA News Cris Cyborg: Ronda Rousey should talk positively about herself, not negatively about others
ShareTweet 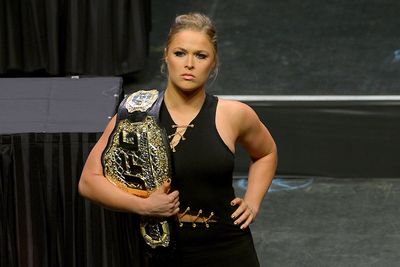 That is, of course, if “Rowdy” wants to be a positive role model to little girls.

Aside from calling out the Ultimate Fighting Championship (UFC) women’s bantamweight champion and accusing her of repeatedly ducking a fight between the two, Cyborg now seems to have a problem with the way “Rowdy” conducts herself in the media.

During a recent interview on Sirius XM, the former Strikeforce featherweight champion blasted Rousey for talking negatively about people during interviews, as opposed to just focusing on herself. A big no-no in Cyborg’s eyes, as Ronda isn’t proving to be the good role model she claims to be to little girls around the globe.

Her words (via FOX Sports):

“Ronda’s always doing interviews and talking bad about somebody. She talks bad about the ring girls in the UFC, she talks about (Floyd) Mayweather and his domestic violence — and I think you have to look at yourself before you diss somebody. Everybody looks at her as an example. A lot of little girls — I hope she realizes that she’s an example and a lot of people see her when she does something like this. Yeah, she’s doing ….View original article