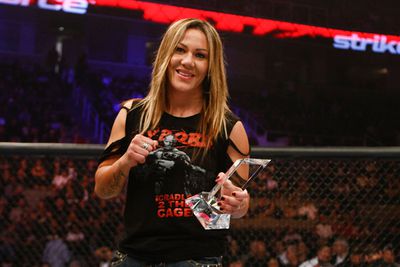 Ronda Rousey suffered her first loss as a mixed martial artist against Holly Holm in Melbourne, going down in the second round of UFC 193’s main event with a vicious head kick.

Invicta FC featherweight champion Cris Cyborg, who was working hard to cut down to 140 pounds — and then 135 pounds — for a shot at Rousey, believes the UFC star made a big mistake in her bantamweight clash with Holm on Saturday night.

“She underestimated Holly Holm,” Cyborg told MMAFighting.com in a text message. “Everyone, even Dana White, was saying Cyborg would be next after she gets past Holly. Look at what Ronda said after the weigh-ins. You don’t play with God.”

Cyborg, who changed her profile picture on WhatsApp to a photo of Rousey getting kicked in the face, mentions “Rowdy’s” Instagram post right after the weigh-ins.

“Fake ass cheap shotting fake respect humility bitch – ‘precher’s daughter’ my ass – I see through your fake sweet act now,” Rousey wrote Friday, “you’re getting your ass kicked tomorrow, and I’m really going to enjoy the beating I give you.”

Despite Rousey’s brutal knockout loss, Cyborg still plans on cutting down to 140 pounds for her ….View original article